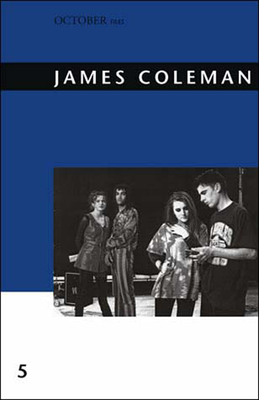 Illustrated critical essays on the work of artist James Coleman.

James Coleman has emerged in recent years as one of the most important artists of visual postmodernism. His work has transformed critical debates about the status of the image in contemporary culture and influenced an entire generation of younger artists in ways that have not yet been fully acknowledged. Until recently, Coleman has enjoyed relatively little critical attention--in part because of his refusal to comment on his projects or to allow his work to be reconstructed outside of the context of its exhibition.The illustrated essays in this book span the entirety of Coleman's career to date, from his early postminimal and conceptual experiments with memory and perception, through his work in film, video, and narrative in the 1980s, to his current ongoing series of slide projections with voice-over that he calls simply projected images. Reflecting the interdisciplinary nature of the debates induced by Coleman's work, the essays discuss issues of subjectivity and identity, nationalism, postcolonialism, memory, spectacle culture, digitalization, and new media. The contributors are Raymond Bellour, Benjamin Buchloh, Lynne Cooke, Jean Fisher, Luke Gibbons, Rosalind Krauss, Anne Rorimer, and Kaja Silverman. Written by curators, critics, and scholars and spanning the fields of art history, literary criticism, philosophy, and film theory, the essays attest to the interdisciplinary challenge of Coleman's work.

H. Sebastian Seung is Professor of Computational Neuroscience in the Department of Brain and Cognitive Sciences and the Department of Physics at the Massachusetts Institute of Technology, and Investigator of the Howard Hughes Medical Institute.
Loading...
or
Not Currently Available for Direct Purchase