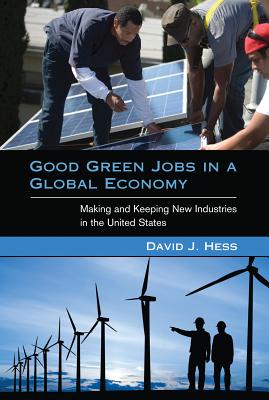 An examination of the politics of green jobs that foresees a potential ideological shift away from neoliberalism toward "developmentalism."

Good Green Jobs in a Global Economy is the first book to explore the broad implications of the convergence of industrial and environnmental policy in the United States. Under the banner of "green jobs," clean energy industries and labor, environmental, and antipoverty organizations have forged "blue-green" alliances and achieved some policy victories, most notably at the state and local levels. In this book, David Hess explores the politics of green energy and green jobs, linking the prospect of a green transition to tectonic shifts in the global economy. He argues that the relative decline in U.S. economic power sets the stage for an ideological shift, away from neoliberalism and toward "developmentalism," an ideology characterized by a more defensive posture with respect to trade and a more active industrial policy.

After describing federal green energy initiatives in the first two years of the Obama administration, Hess turns his attention to the state and local levels, examining demand-side and supply-side support for green industry and local small business. He analyzes the successes and failures of green coalitions and the partisan patterns of support for green energy reform. This new piecemeal green industrial policy, Hess argues, signals a fundamental challenge to anti-interventionist beliefs about the relationship between the government and the economy.