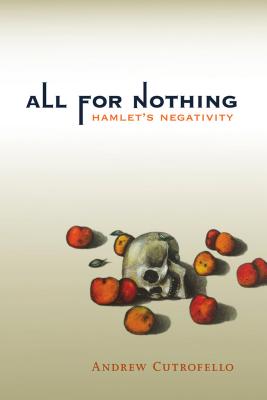 Hamlet as performed by philosophers, with supporting roles played by Kant, Nietzsche, and others.

A specter is haunting philosophy--the specter of Hamlet. Why is this? Wherefore? What should we do?

Entering from stage left: the philosopher's Hamlet. The philosopher's Hamlet is a conceptual character, played by philosophers rather than actors. He performs not in the theater but within the space of philosophical positions. In All for Nothing, Andrew Cutrofello critically examines the performance history of this unique role.

The philosopher's Hamlet personifies negativity. In Shakespeare's play, Hamlet's speech and action are characteristically negative; he is the melancholy Dane. Most would agree that he has nothing to be cheerful about. Philosophers have taken Hamlet to embody specific forms of negativity that first came into view in modernity. What the figure of the Sophist represented for Plato, Hamlet has represented for modern philosophers. Cutrofello analyzes five aspects of Hamlet's negativity: his melancholy, negative faith, nihilism, tarrying (which Cutrofello distinguishes from "delaying"), and nonexistence. Along the way, we meet Hamlet in the texts of Kant, Coleridge, Hegel, Marx, Schopenhauer, Kierkegaard, Nietzsche, Freud, Russell, Wittgenstein, Heidegger, Benjamin, Arendt, Schmitt, Lacan, Deleuze, Foucault, Derrida, Badiou, Zizek, and other philosophers. Whirling across a kingdom of infinite space, the philosopher's Hamlet is nothing if not thought-provoking.

Andrew Cutrofello is Professor of Philosophy at Loyola University Chicago. He is the author of Continental Philosophy: A Contemporary Introduction and other books.
Loading...
or
Not Currently Available for Direct Purchase