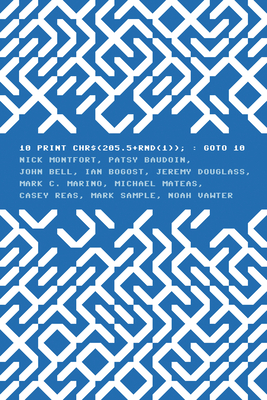 A single line of code offers a way to understand the cultural context of computing.

This book takes a single line of code—the extremely concise BASIC program for the Commodore 64 inscribed in the title—and uses it as a lens through which to consider the phenomenon of creative computing and the way computer programs exist in culture. The authors of this collaboratively written book treat code not as merely functional but as a text—in the case of 10 PRINT, a text that appeared in many different printed sources—that yields a story about its making, its purpose, its assumptions, and more. They consider randomness and regularity in computing and art, the maze in culture, the popular BASIC programming language, and the highly influential Commodore 64 computer.

10 PRINT CHR$ (205.5 + RND (1)); : GOTO 10, a new book collaboratively written by 10 authors, takes a single line of code—inscribed in the book's mouthful of a title—and explodes it. That one line, a seemingly clumsy scrap of BASIC, generates a fascinatingly complicated maze on a Commodore 64.... Though 10 PRINT CHR$ (205.5 + RND (1)); : GOTO 10 is occasionally whiplash-inducing in its headlong rush through history, the connections it makes over 294 pages are inspired. One of the most compelling sections of the book discusses the cultural history of mazes, relating 10 PRINT's maze back to the labyrinth of Knossos, where, according to the great Greek myth, Theseus waged battle with the terrifying Minotaur.—Geeta Dayal, Slate—

Nick Montfort is Professor of Digital Media at MIT. He is the author of Twisty Little Passages: An Approach to Interactive Fiction and Exploratory Programming for the Arts and Humanities; the coauthor of Racing the Beam: The Atari Video Computer System and 10 PRINT CHR$(205.5+RND(1)); : GOTO 10; and the coeditor of The New Media Reader (all published by the MIT Press).

Patsy Baudoin works independently as a translator and developmental editor.

John Bell is Assistant Professor of Innovative Communication Design at the University of Maine.

Ian Bogost is Ivan Allen College Distinguished Chair in Media Studies and Professor of Interactive Computing at the Georgia Institute of Technology, a Founding Partner at Persuasive Games LLC, and the coauthor of Newsgames: Journalism at Play (MIT Press, 2010).

Jeremy Douglass is a postdoctoral researcher in software studies at the University of California, San Diego, in affiliation with Calit2.

Mark C. Marino is Professor of Writing at the University of Southern California, where he directs the Humanities and Critical Code Studies Lab. He is a coauthor of 10 PRINT CHR$(205.5+RND(1)); : GOTO 10 (MIT Press).

Michael Mateas is Associate Professor of Computer Science at the University of California, Santa Cruz

Casey Reas is Professor of Design Media Arts at UCLA and coauthor of Processing: A Programming Handbook for Visual Designers and Artists (MIT Press, 2007).

Noah Vawter is a sound artist.
Loading...
or
Not Currently Available for Direct Purchase