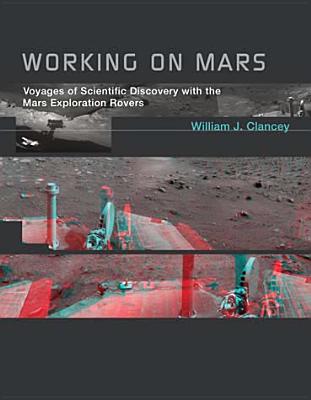 Voyages of Scientific Discovery with the Mars Exploration Rovers

What it's like to explore Mars from Earth: How the Mars rovers provide scientists with a virtual experience of being on Mars.

Geologists in the field climb hills and hang onto craggy outcrops; they put their fingers in sand and scratch, smell, and even taste rocks. Beginning in 2004, however, a team of geologists and other planetary scientists did field science in a dark room in Pasadena, exploring Mars from NASA's Jet Propulsion Laboratory (JPL) by means of the remotely operated Mars Exploration Rovers (MER). Clustered around monitors, living on Mars time, painstakingly plotting each movement of the rovers and their tools, sensors, and cameras, these scientists reported that they felt as if they were on Mars themselves, doing field science. The MER created a virtual experience of being on Mars. In this book, William Clancey examines how the MER has changed the nature of planetary field science.

Drawing on his extensive observations of scientists in the field and at the JPL, Clancey investigates how the design of the rover mission enables field science on Mars, explaining how the scientists and rover engineers manipulate the vehicle and why the programmable tools and analytic instruments work so well for them. He shows how the scientists felt not as if they were issuing commands to a machine but rather as if they were working on the red planet, riding together in the rover on a voyage of discovery.

William J. Clancey is Chief Scientist of Human-Centered Computing in the Intelligent Systems Division at NASA Ames Research Center, and Senior Research Scientist at the Florida Institute for Human and Machine Cognition.
Loading...
or
Not Currently Available for Direct Purchase