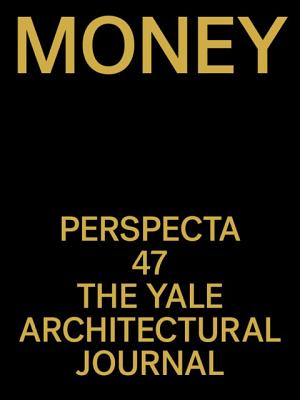 Money plays a paradoxical role in the creation of architecture. Formless itself, money is a fundamental form giver. At all scales, and across the ages, architecture is a product of the financial environment in which it is conceived, for better or worse. Yet despite its ubiquity, money is often disregarded as a factor in conceptual design and is persistently avoided by architectural academia as a serious field of inquiry. It is time to break these habits. In the contemporary world, in which economies are increasingly connected, architects must creatively harness the financial logics behind architecture in order to contribute meaningfully to the development of the built environment.

This issue of "Perspecta" -- the oldest and most distinguished student-edited architectural journal in America -- examines the ways in which money intersects with architectural discourse, design practice, and urban form, in order to encourage a productive relationship between money and the discipline. Contributions from a diverse group of scholars, practitioners, and artists create a dialogue about money's ambiguous position in architecture, reflecting on topics that range from the aesthetics of austerity to the underwriting of large-scale art projects to the economic implications of building information modeling.