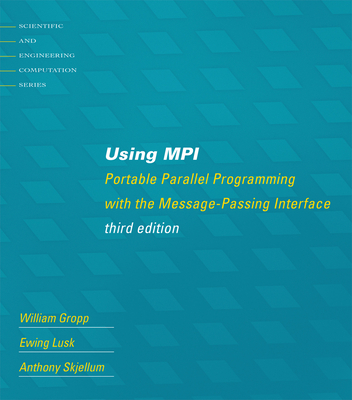 The thoroughly updated edition of a guide to parallel programming with MPI, reflecting the latest specifications, with many detailed examples.

This book offers a thoroughly updated guide to the MPI (Message-Passing Interface) standard library for writing programs for parallel computers. Since the publication of the previous edition of Using MPI, parallel computing has become mainstream. Today, applications run on computers with millions of processors; multiple processors sharing memory and multicore processors with multiple hardware threads per core are common. The MPI-3 Forum recently brought the MPI standard up to date with respect to developments in hardware capabilities, core language evolution, the needs of applications, and experience gained over the years by vendors, implementers, and users. This third edition of Using MPI reflects these changes in both text and example code.

The book takes an informal, tutorial approach, introducing each concept through easy-to-understand examples, including actual code in C and Fortran. Topics include using MPI in simple programs, virtual topologies, MPI datatypes, parallel libraries, and a comparison of MPI with sockets. For the third edition, example code has been brought up to date; applications have been updated; and references reflect the recent attention MPI has received in the literature. A companion volume, Using Advanced MPI, covers more advanced topics, including hybrid programming and coping with large data.