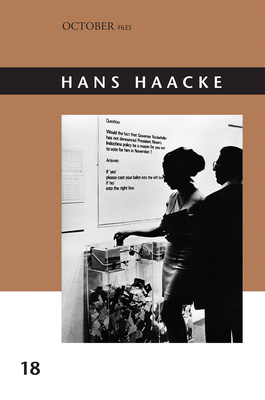 Critical texts that span almost fifty years, mapping Haacke's progression from engagement with biological systems to interrogation of the social and economic underpinnings of art.

For five decades, the artist Hans Haacke (b. 1936) has created works that explore the social, political, and economic underpinnings of the production of art. His works make plain the hidden and not-so-hidden agendas of those--from Cartier to David Koch--who support art in the service of industry; they expose such inconvenient social and economic truths as the real estate holdings of Manhattan slumlords, and the attempts to whitewash support for the Nazi regime, apartheid, or the war on terror through museum donations.

This book gathers interviews, difficult-to-find essays, cornerstones of institutional critique, and new critical approaches by writers that include Benjamin H. D. Buchloh, Jack Burnham, Rosalyn Deutsche, and Leo Steinberg. Haacke's 1971 Guggenheim exhibition was famously canceled when the artist refused to withdraw several proposed works, including one exposing the business dealings of a Manhattan real estate company. This volume includes Edward Fry's catalog text for that show, as well as Walter Grasskamp's "An Unpublished Text for an Unpainted Picture," redacted from an exhibition catalog in 1984 because of statements about the German collector Peter Ludwig. Other essays consider such topics as Haacke's controversial commission for the Reichstag; the activation of the spectator, from Condensation Cube to the Polls; the conceptual continuity of his practice with regard to General Systems Theory; and his delayed and problematic reception in both the United States and Europe. With contemporary essays and scholarly reassessments, this collection serves as an essential guide to critical thinking on Haacke's artistic practice, from the works of the 1960s that engage with physical and biological systems to his later interrogations of the social and economic underpinnings of art.