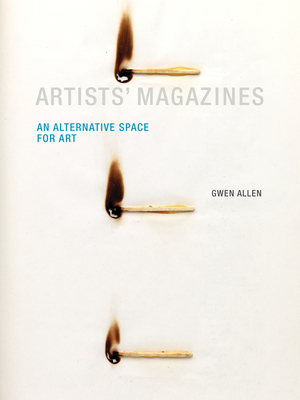 An Alternative Space for Art

How artists' magazines, in all their ephemerality, materiality, and temporary intensity, challenged mainstream art criticism and the gallery system.

During the 1960s and 1970s, magazines became an important new site of artistic practice, functioning as an alternative exhibition space for the dematerialized practices of conceptual art. Artists created works expressly for these mass-produced, hand-editioned pages, using the ephemerality and the materiality of the magazine to challenge the conventions of both artistic medium and gallery. In Artists' Magazines, Gwen Allen looks at the most important of these magazines in their heyday (the 1960s to the 1980s) and compiles a comprehensive, illustrated directory of hundreds of others.

Among the magazines Allen examines are Aspen (1965–1971), a multimedia magazine in a box—issues included Super-8 films, flexi-disc records, critical writings, artists' postage stamps, and collectible chapbooks; Avalanche (1970-1976), which expressed the countercultural character of the emerging SoHo art community through its interviews and artist-designed contributions; and Real Life (1979-1994), published by Thomas Lawson and Susan Morgan as a forum for the Pictures generation. These and the other magazines Allen examines expressed their differences from mainstream media in both form and content: they cast their homemade, do-it-yourself quality against the slickness of an Artforum, and they created work that defied the formalist orthodoxy of the day. Artists' Magazines, featuring abundant color illustrations of magazine covers and content, offers an essential guide to a little-explored medium.


Praise For Artists' Magazines: An Alternative Space for Art…

…amongst the most thorough discursions into the influence of little magazines upon late-twentieth-century visual culture...it is great to read for its well-researched history and analysis of a period when little magazines were testing the waters of art and publishing.—Eye—

Gwen Allen is Associate Professor of History of Art at San Francisco University. She is the author of Artists' Magazines: An Alternative Space for Art (MIT Press).
Loading...
or support indie stores by buying on
(This book is on backorder)