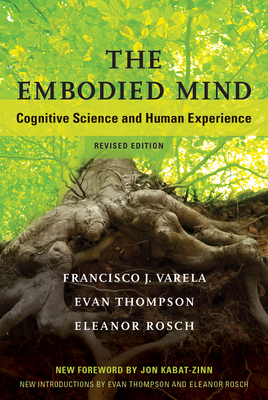 A new edition of a classic work that originated the “embodied cognition” movement and was one of the first to link science and Buddhist practices.

This classic book, first published in 1991, was one of the first to propose the “embodied cognition” approach in cognitive science. It pioneered the connections between phenomenology and science and between Buddhist practices and science—claims that have since become highly influential. Through this cross-fertilization of disparate fields of study, The Embodied Mind introduced a new form of cognitive science called “enaction,” in which both the environment and first person experience are aspects of embodiment. However, enactive embodiment is not the grasping of an independent, outside world by a brain, a mind, or a self; rather it is the bringing forth of an interdependent world in and through embodied action. Although enacted cognition lacks an absolute foundation, the book shows how that does not lead to either experiential or philosophical nihilism. Above all, the book's arguments were powered by the conviction that the sciences of mind must encompass lived human experience and the possibilities for transformation inherent in human experience.

This revised edition includes substantive introductions by Evan Thompson and Eleanor Rosch that clarify central arguments of the work and discuss and evaluate subsequent research that has expanded on the themes of the book, including the renewed theoretical and practical interest in Buddhism and mindfulness. A preface by Jon Kabat-Zinn, the originator of the mindfulness-based stress reduction program, contextualizes the book and describes its influence on his life and work.

Francisco J. Varela (1946–2001) was Director of the Centre National de Recherche Scientifique, Professor of Cognitive Science and Epistemology, CREA, at the Ecole Polytechnique, Paris, and Cofounder of the Mind and Life Institute.

Evan Thompson is Professor of Philosophy at the University of British Columbia and author of Waking, Dreaming, Being.

Eleanor Rosch is Professor of Psychology at the University of California, Berkeley.
Loading...
or
Not Currently Available for Direct Purchase