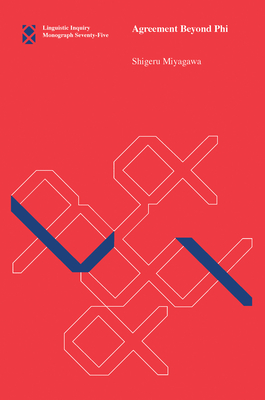 An argument that agreement and agreementless languages are unified under an expanded view of grammatical features including both phi-features and certain discourse configurational features.

Much attention in theoretical linguistics in the generative and Minimalist traditions is concerned with issues directly or indirectly related to movement. The EPP (extended projection principle), introduced by Chomsky in 1981, appeared to coincide with morphological agreement, and agreement came to play a central role as the driver of movement and other narrow-syntax operations. In this book, Shigeru Miyagawa continues his investigation into a computational equivalent for agreement in agreementless languages such as Japanese.

Miyagawa extends his theory of Strong Uniformity, introduced in his earlier book, Why Agree? Why Move? Unifying Agreement-Based and Discourse-Configurational Languages (MIT Press). He argues that agreement and agreementless languages are unified under an expanded view of grammatical features including both phi-features and discourse configurational features of topic and focus. He looks at various combinations of these two grammatical features across a number of languages and phenomena, including allocutive agreement, root phenomena, topicalization, "why" questions, and case alternation.