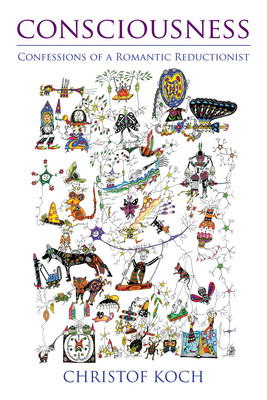 Confessions of a Romantic Reductionist

A fascinating exploration of the human brain that combines “the leading edge of consciousness science with surprisingly personal and philosophical reflection . . . shedding light on how scientists really think”—this is “science writing at its best” (Times Higher Education).

In which a scientist searches for an empirical explanation for phenomenal experience, spurred by his instinctual belief that life is meaningful.

What links conscious experience of pain, joy, color, and smell to bioelectrical activity in the brain? How can anything physical give rise to nonphysical, subjective, conscious states? Christof Koch has devoted much of his career to bridging the seemingly unbridgeable gap between the physics of the brain and phenomenal experience. This engaging book—part scientific overview, part memoir, part futurist speculation—describes Koch’s search for an empirical explanation for consciousness. Koch recounts not only the birth of the modern science of consciousness but also the subterranean motivation for his quest—his instinctual (if “romantic”) belief that life is meaningful.

Koch describes his own groundbreaking work with Francis Crick in the 1990s and 2000s and the gradual emergence of consciousness (once considered a “fringy” subject) as a legitimate topic for scientific investigation. Present at this paradigm shift were Koch and a handful of colleagues, including Ned Block, David Chalmers, Stanislas Dehaene, Giulio Tononi, Wolf Singer, and others. Aiding and abetting it were new techniques to listen in on the activity of individual nerve cells, clinical studies, and brain-imaging technologies that allowed safe and noninvasive study of the human brain in action.

Koch gives us stories from the front lines of modern research into the neurobiology of consciousness as well as his own reflections on a variety of topics, including the distinction between attention and awareness, the unconscious, how neurons respond to Homer Simpson, the physics and biology of free will, dogs, Der Ring des Nibelungen, sentient machines, the loss of his belief in a personal God, and sadness. All of them are signposts in the pursuit of his life's work—to uncover the roots of consciousness.

Praise For Consciousness: Confessions of a Romantic Reductionist…

“Koch weaves a vivid and poignant story, punctuated by fascinating characters and compelling science. The book will leave you with a small piece of Koch’s own consciousness, plucked from his head and delivered into yours.”
—Science News

“ . . . definitely worth reading.... I argued with Koch all the way through this book. And I loved every minute of it.”
—Robert Stickgold, Nature

“Among the plethora of books on consciousness, this engaging blend of science, autobiography and honest self-reflection stands out. It combines a lucid description of the leading edge of consciousness science with a surprisingly personal and philosophical reflection of the author's life as one of its foremost authorities, shedding light on how scientists really think. Science writing at its best.”
—Anil Seth, Times Higher Education

“ . . . the book offers good rides through the wild forest of the neuroscience of consciousness. Koch is fearless, and does not shrink from talking about phenomenology and qualia; he includes them and tries to formalise consciousness by linking it to direct brain signals or well-defined psychological constructs.”
—Tristan Bekinschtein, Times Higher Education

“This new volume is attractive not only for the breadth and depth that is typical of Koch’s writing, but also for its highly accessible nature . . . This important book serves as a subtle introduction to many of the driving questions of the discipline that may well significantly change people's understanding of human nature.”
—Choice

Christof Koch is President and Chief Scientist of the Allen Institute for Brain Science in Seattle, following twenty-seven years as a Professor at the California Institute of Technology. He is the author of Consciousness: Confessions of a Romantic Reductionist (MIT Press), The Quest for Consciousness: A Neurobiological Approach, and other books.
Loading...
or support indie stores by buying on