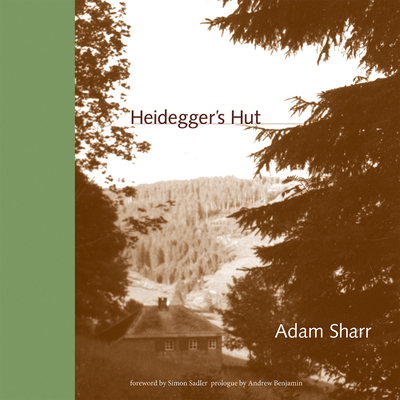 The intense relationship between philosopher Martin Heidegger and his cabin in the Black Forest: the first substantial account of die H tte and its influence on Heidegger's life and work.

This is the most thorough architectural 'crit' of a hut ever set down, the justification for which is that the hut was the setting in which Martin Heidegger wrote phenomenological texts that became touchstones for late-twentieth-century architectural theory.
--from the foreword by Simon Sadler

Beginning in the summer of 1922, philosopher Martin Heidegger (1889-1976) occupied a small, three-room cabin in the Black Forest Mountains of southern Germany. He called it die H tte (the hut). Over the years, Heidegger worked on many of his most famous writings in this cabin, from his early lectures to his last enigmatic texts. He claimed an intellectual and emotional intimacy with the building and its surroundings, and even suggested that the landscape expressed itself through him, almost without agency. In Heidegger's Hut, Adam Sharr explores this intense relationship of thought, place, and person.

Heidegger's mountain hut has been an object of fascination for many, including architects interested in his writings about dwelling and place. Sharr's account--the first substantive investigation of the building and Heidegger's life there--reminds us that, in approaching Heidegger's writings, it is important to consider the circumstances in which the philosopher, as he himself said, felt transported into the work's own rhythm. Indeed, Heidegger's apparent abdication of agency and tendency toward romanticism seem especially significant in light of his troubling involvement with the Nazi regime in the early 1930s.

Sharr draws on original research, including interviews with Heidegger's relatives, as well as on written accounts of the hut by Heidegger and his visitors. The book's evocative photographs include scenic and architectural views taken by the author and many remarkable images of a septuagenarian Heidegger in the hut taken by the photojournalist Digne Meller-Markovicz. There are many ways to interpret Heidegger's hut--as the site of heroic confrontation between philosopher and existence; as the petit bourgeois escape of a misguided romantic; as a place overshadowed by fascism; or as an entirely unremarkable little building. Heidegger's Hut does not argue for any one reading, but guides readers toward their own possible interpretations of the importance of die H tte.

Adam Sharr is Lecturer in Architecture at the Welsh School of Architecture at Cardiff University and a practicing architect.
Loading...
or
Not Currently Available for Direct Purchase