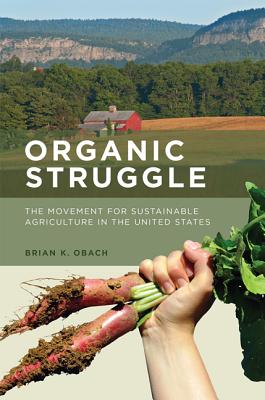 The Movement for Sustainable Agriculture in the United States (Food)

An analysis of the successes and failures of the organic movement, focusing on coalition dynamics, movement-state relations, and market-based strategies for social change.

In the early 1970s, organic farming was an obscure agricultural practice, associated with the counterculture rather than commerce. Today, organic agriculture is a multi-billion dollar industry; organic food can be found on the shelves of every supermarket in America. In Organic Struggle, Brian Obach examines the evolution of the organic movement in the United States, a movement that seeks to transform our system of agriculture and how we think about food.

Obach analyzes why the organic movement developed as it did and evaluates its achievements and shortcomings. He identifies how divergent interests within the diverse organic coalition created vulnerabilities for the movement. In particular, he examines the ideological divide between those he calls the "spreaders," who welcome the wider market for organic food and want to work with both government and agribusiness, and the more purist "tillers," who see organic practices as part of a broader social transformation that will take place outside existing institutions.

Obach argues that the movement's changing relationship with governmental institutions is crucial to understanding the trajectory of the organic sector. The government-run National Organic Program fostered dramatic growth and deep corporate penetration of the organic market. While many activists were disillusioned by changes in the organic industry that came with corporate and government involvement, Obach sees a failure in the essential market- based strategy adopted by the movement early in its history. He argues for a refocus on policy efforts that can reshape the agricultural system as a whole.

Brian K. Obach is Associate Professor of Sociology at the State University of New York at New Paltz and the author of Labor and the Environmental Movement: The Quest for Common Ground (MIT Press).
or
Not Currently Available for Direct Purchase
Copyright © 2020 American Booksellers Association