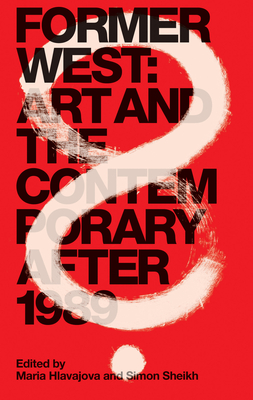 Art and the Contemporary After 1989

Explorations of the "formering" of the West in contemporary art in the post-communist, postcolonial, posthuman, post-ideological, and posthistorical era.

What has become of the so-called West after the Cold War? Why hasn't the West simply become "former," as has its supposed counterpart, the "former East"? In this book, artists, thinkers, and activists explore the repercussions of the political, cultural, and economic events of 1989 on both art and the contemporary. The culmination of an eight-year curatorial research experiment, Former West imagines a world beyond our immediate condition.

The writings, visual essays, and conversations in Former West--more than seventy diverse contributions with global scope--unfold a tangled cartography far more complex than the simplistic dichotomy of East vs. West. In fact, the Cold War was a contest not between two ideological blocs but between two variants of Western modernity. It is this conceptual "Westcentrism" that a "formering" of the West seeks to undo.

The contributions revisit contemporary debates through the lens of a "former West." They rethink conceptions of time and space dominating the legacy of the 1989-1990 revolutions in the former East, and critique historical periodization of the contemporary. The contributors map the political economy and social relations of the contemporary, consider the implications of algorithmic cultures and the posthuman condition, and discuss notions of solidarity--the difficulty in constructing a new "we" despite migration, the refugee crisis, and the global class recomposition. Can art institute the contemporary it envisions, and live as if it were possible?

Maria Hlavajova is the Founding General and Artistic Director of BAK, basis voor actuele kunst, Utrecht. She is coeditor of Former West: Art and the Contemporary after 1989, and Propositions for Non-Fascist Living: Tentative and Urgent (both published by the MIT Press). Simon Sheikh, a curator and theorist, is Reader in Art and Programme Director of the MFA in Curating at Goldsmiths, University of London.
Loading...
or
Not Currently Available for Direct Purchase