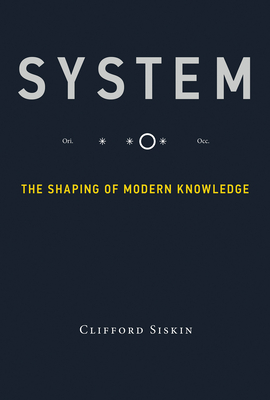 The Shaping of Modern Knowledge (Infrastructures)

The role that "system" has played in the shaping and reshaping of modern knowledge, from Galileo and Newton to our own "computational universe."

A system can describe what we see (the solar system), operate a computer (Windows 10), or be made on a page (the fourteen engineered lines of a sonnet). In this book, Clifford Siskin shows that system is best understood as a genre--a form that works physically in the world to mediate our efforts to understand it. Indeed, many Enlightenment authors published works they called "system" to compete with the essay and the treatise. Drawing on the history of system from Galileo's "message from the stars" and Newton's "system of the world" to today's "computational universe," Siskin illuminates the role that the genre of system has played in the shaping and reshaping of modern knowledge.

Previous engagements with systems have involved making them, using them, or imagining better ones. Siskin offers an innovative perspective by investigating system itself. He considers the past and present, moving from the "system of the world" to "a world full of systems." He traces the turn to system in the seventeenth and eighteenth centuries, and describes this primary form of Enlightenment as a mediator of political, cultural, and social modernity--pointing to the moment when people began to "blame the system" for working both too well ("you can't beat the system") and not well enough (it always seems to "break down"). Throughout, his touchstones are: what system is and how it has changed; how it has mediated knowledge; and how it has worked in the world.

Clifford Siskin is Henry W. and Alfred A. Berg Professor of English and American Literature at New York University, and Director of the Re: Enlightenment Project.
or
Not Currently Available for Direct Purchase
Copyright © 2020 American Booksellers Association