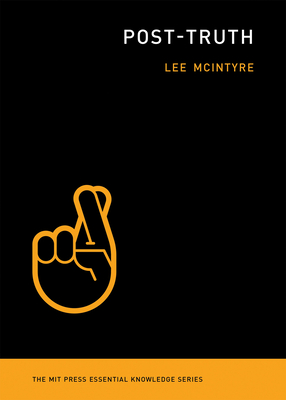 How we arrived in a post-truth era, when “alternative facts” replace actual facts, and feelings have more weight than evidence.

Are we living in a post-truth world, where “alternative facts” replace actual facts and feelings have more weight than evidence? How did we get here? In this volume in the MIT Press Essential Knowledge series, Lee McIntyre traces the development of the post-truth phenomenon from science denial through the rise of “fake news,” from our psychological blind spots to the public's retreat into “information silos.”

What, exactly, is post-truth? Is it wishful thinking, political spin, mass delusion, bold-faced lying? McIntyre analyzes recent examples—claims about inauguration crowd size, crime statistics, and the popular vote—and finds that post-truth is an assertion of ideological supremacy by which its practitioners try to compel someone to believe something regardless of the evidence. Yet post-truth didn't begin with the 2016 election; the denial of scientific facts about smoking, evolution, vaccines, and climate change offers a road map for more widespread fact denial. Add to this the wired-in cognitive biases that make us feel that our conclusions are based on good reasoning even when they are not, the decline of traditional media and the rise of social media, and the emergence of fake news as a political tool, and we have the ideal conditions for post-truth. McIntyre also argues provocatively that the right wing borrowed from postmodernism—specifically, the idea that there is no such thing as objective truth—in its attacks on science and facts.

McIntyre argues that we can fight post-truth, and that the first step in fighting post-truth is to understand it.

"My book of the week is Post-Truth by Lee McIntyre. This is a slender volume from MIT's Essential Knowledge Series that looks at one of the most disturbing trends of our time: the increasing dismissal of science, evidence, facts, and truth itself. The author gives us an intelligent account of why it's happened and a compelling reminder that we should all fight back against this dangerous nihilistic idea."
—Fareed Zakaria, CNN

"This is a gem of a short treatise. Lee McIntyre's Post-Truth is a perfect counter to a problem that has erupted in our national consciousness—alternative facts. McIntyre's enumerated suggestions on how we must all be our own fact checkers in this post-truth age should be taped to the computer keyboard of every journalist, politician, and reader in America, before the next election."
—Michael Shermer, Skeptic Magazine

"McIntyre's book is perhaps the most thoughtful of the post-truth set....[He] argues persuasively that our methods of ascertaining truth—not just the facts themselves—are under attack, and that this assault is especially dangerous."
—Carlos Lozada, Washington Post

"What I like about this book, which is more of a philosophical tour, is that the author isn't just concerned about the fate of particular facts or truths, but he thinks what is really under assault here is the very method by which we ascertain truth or get to truth, in particular, science."
—Carlos Lozada, PBS NewsHour

Lee McIntyre is a Research Fellow at the Center for Philosophy and History of Science at Boston University. He is the author of Dark Ages: The Case for a Science of Human Behavior and Post-Truth, both published by the MIT Press.
Loading...
or support indie stores by buying on