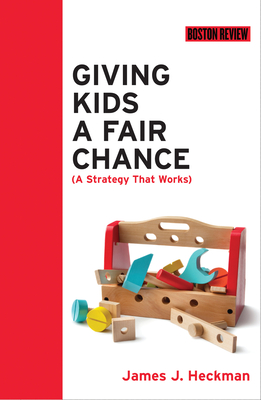 A top economist weighs in on one of the most urgent questions of our times: What is the source of inequality and what is the remedy?

In Giving Kids a Fair Chance, Nobel Prize-winning economist James Heckman argues that the accident of birth is the greatest source of inequality in America today. Children born into disadvantage are, by the time they start kindergarten, already at risk of dropping out of school, teen pregnancy, crime, and a lifetime of low-wage work. This is bad for all those born into disadvantage and bad for American society.

Current social and education policies directed toward children focus on improving cognition, yet success in life requires more than smarts. Heckman calls for a refocus of social policy toward early childhood interventions designed to enhance both cognitive abilities and such non-cognitive skills as confidence and perseverance. This new focus on preschool intervention would emphasize improving the early environments of disadvantaged children and increasing the quality of parenting while respecting the primacy of the family and America's cultural diversity.

Heckman shows that acting early has much greater positive economic and social impact than later interventions—which range from reduced pupil-teacher ratios to adult literacy programs to expenditures on police—that draw the most attention in the public policy debate. At a time when state and local budgets for early interventions are being cut, Heckman issues an urgent call for action and offers some practical steps for how to design and pay for new programs.

The debate that follows delves deeply into some of the most fraught questions of our time: the sources of inequality, the role of schools in solving social problems, and how to invest public resources most effectively. Mike Rose, Geoffrey Canada, Charles Murray, Carol Dweck, Annette Lareau, and other prominent experts participate.

Giving Kids a Fair Chance is remarkable for the scientific advances that it represents, in good part due to Heckman and his co-authors.... The book stands out among economic studies in its attention to noncognitive skills, 'including strength of motivation, an ability to act on long-term plans, and the socioemotional regulation needed to work with others' or 'character.'—Science—

James J. Heckman is the Henry Schultz Distinguished Service Professor of Economics at the University of Chicago. He was a recipient of the Nobel Prize for Economic Sciences in 2000. He is the coauthor (with Alan B. Krueger) of Inequality in America: What Role for Human Capital Policies? (MIT Press).
Loading...
or
Not Currently Available for Direct Purchase