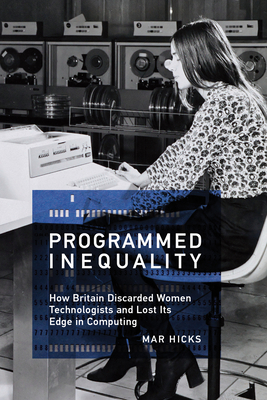 This “sobering tale of the real consequences of gender bias” explores how Britain lost its early dominance in computing by systematically discriminating against its most qualified workers: women (Harvard Magazine)

In 1944, Britain led the world in electronic computing. By 1974, the British computer industry was all but extinct. What happened in the intervening thirty years holds lessons for all postindustrial superpowers. As Britain struggled to use technology to retain its global power, the nation’s inability to manage its technical labor force hobbled its transition into the information age.

In Programmed Inequality, Mar Hicks explores the story of labor feminization and gendered technocracy that undercut British efforts to computerize. That failure sprang from the government’s systematic neglect of its largest trained technical workforce simply because they were women. Women were a hidden engine of growth in high technology from World War II to the 1960s. As computing experienced a gender flip, becoming male-identified in the 1960s and 1970s, labor problems grew into structural ones and gender discrimination caused the nation’s largest computer user—the civil service and sprawling public sector—to make decisions that were disastrous for the British computer industry and the nation as a whole.

Drawing on recently opened government files, personal interviews, and the archives of major British computer companies, Programmed Inequality takes aim at the fiction of technological meritocracy. Hicks explains why, even today, possessing technical skill is not enough to ensure that women will rise to the top in science and technology fields. Programmed Inequality shows how the disappearance of women from the field had grave macroeconomic consequences for Britain, and why the United States risks repeating those errors in the twenty-first century.

Praise For Programmed Inequality: How Britain Discarded Women Technologists and Lost Its Edge in Computing (History of Computing)…

In this volume, Hicks has delivered a sophisticated work of scholarship: detailed, insightful, deeply researched.... But the book has a much wider relevance, too, which it would be unwise to understate. Discussing, as it does, the role of profoundly structural gender discrimination in the collapse of technical dominance by a formerly great power, this book makes very uncomfortable reading – on a number of levels.—Times Higher Education—

Fans of the movie Hidden Figures may be interested in this scholarly analysis of goings on across the Atlantic, by an historian of science at the Illinois Institute of Technology. Her deep dive into 'how Britain discarded women technologists and lost its edge in computing,' the subtitle, is a sobering tale of the real consequences of gender bias—a problem that persists in many technical fields today.

...makes a detailed historical and symbolic case for suppressed and unvalued women talent, and bad management for a whole country in a strategical sector.

Mar Hicks is Associate Professor of History at Illinois Institute of Technology.
Loading...
or
Not Currently Available for Direct Purchase