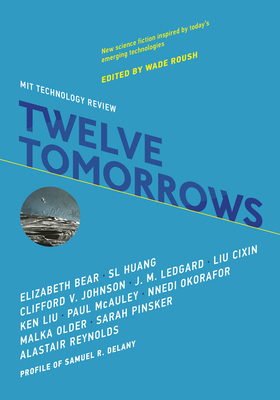 In this book, new and established voices in science fiction come together to offer original stories of the future. Ken Liu writes about a virtual currency that hijacks our empathy; Elizabeth Bear shows us a smart home tricked into kidnapping its owner; Clifford V. Johnson presents, in a graphic novella, the story of a computer scientist seeing a new side of the AIs she has invented; and J. M. Ledgard describes a 28,000-year-old AI who meditates on the nature of loneliness. We encounter metal-melting viruses, vegetable-based heart transplants, search-and-rescue drones, and semi-automated sailing ships. Sometimes hilarious, sometimes frightening, and always relevant, Twelve Tomorrows offers compelling visions of potential futures.

Originally launched in 2011 by MIT Technology Review, the Twelve Tomorrows series explores the future implications of emerging technologies through the lens of fiction. Featuring a diverse collection of authors, characters, and stories rooted in contemporary real-world science, each volume in the series offers conceivable and inclusive stories of the future, celebrating and continuing the genre of “hard” science fiction pioneered by authors such as Isaac Asimov, Arthur C. Clarke, and Robert Heinlein. Twelve Tomorrows is the first volume of the series to be published in partnership with the MIT Press.

Contemplative rather than showy and lurid – editor Wade Roush specifically banned dystopian tales from the book - Twelve Tomorrows will certainly provide food for thought….There's enough here to make us wonder – probably not for the first or, indeed, the last item – if drone technology, the Internet, and the quest for true artificial intelligence are really all we tend to make them out to be.—Starbust—

This MIT Technology Review anthology is a science-fictional exploration of emergent technologies and a veritable constellation of brilliant writers, among them Liu Cixin, Ken Liu, Alastair Reynolds, Elizabeth Bear and Sarah Pinsker… A profile of esteemed sci-fi author Samuel R. Delany is included. 'Hard' sci-fi at its best.

As a fictional primer on potential near-futures, [Twelve Tomorrows] is impressive.

Probably the best science fiction anthology of the year.

—Jonathan Strahan, introduction to The Best Science Fiction and Fantasy of the Year—

Wade Roush is a freelance science and technology writer, columnist at Scientific American, and host and producer of the tech-and-culture podcast Soonish. His work has appeared in Science, Xconomy, and MIT Technology Review. He is the editor of the science fiction anthology Twelve Tomorrows (MIT Press).

Clifford V. Johnson, Professor of Physics at the University of Southern California, gives many public lectures about his research and appears often in television documentaries as an expert. He has been science advisor for several movies and television series, including Marvel's Thor: Ragnarok and the National Geographic Channel's Genius. He received the American Association of Physics Teachers 2018 Klopsteg Memorial Award for outstanding communication of the excitement of contemporary physics to the general public.
Loading...
or
Not Currently Available for Direct Purchase