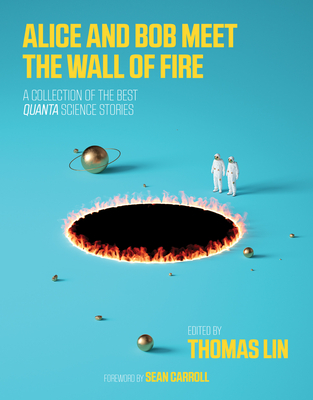 Alice and Bob Meet the Wall of Fire

The Biggest Ideas in Science from Quanta

Accessible, essential coverage of the latest findings in challenging, speculative, and cutting-edge science, from the leaders in scientific journalism at Quanta Magazine

“If you're a science and data nerd like me, you may be interested in Alice and Bob Meet the Wall of Fire . . . from Quanta Magazine and Thomas Lin.” —Bill Gates

These stories reveal the latest efforts to untangle the mysteries of the universe. Bringing together the best and most interesting science stories appearing in Quanta Magazine over the past five years, Alice and Bob Meet the Wall of Fire reports on some of the greatest scientific minds as they test the limits of human knowledge. Quanta, under editor-in-chief Thomas Lin, is the only popular publication that offers in-depth coverage of today's challenging, speculative, cutting-edge science. It communicates science by taking it seriously, wrestling with difficult concepts and clearly explaining them in a way that speaks to our innate curiosity about our world and ourselves.

In the title story, Alice and Bob—beloved characters of various thought experiments in physics—grapple with gravitational forces, possible spaghettification, and a massive wall of fire as Alice jumps into a black hole. Another story considers whether the universe is impossible, in light of experimental results at the Large Hadron Collider. We learn about quantum reality and the mystery of quantum entanglement; explore the source of time's arrow; and witness a eureka moment when a quantum physicist exclaims: “Finally, we can understand why a cup of coffee equilibrates in a room.” We reflect on humans’ enormous skulls and the Brain Boom; consider the evolutionary benefits of loneliness; peel back the layers of the newest artificial-intelligence algorithms; follow the “battle for the heart and soul of physics”; and mourn the disappearance of the “diphoton bump,” revealed to be a statistical fluctuation rather than a revolutionary new particle. These stories from Quanta give us a front-row seat to scientific discovery.

Praise For Alice and Bob Meet the Wall of Fire: The Biggest Ideas in Science from Quanta…

Quanta Magazine, from which the essays for this book were drawn, received the 2022 Pulitzer Prize in Explanatory Reporting!

"If you’re a science and data nerd like me, you may be interested in Alice and Bob Meet the Wall of Fire and The Prime Number Conspiracy from Quanta Magazine and Thomas Lin."—Bill Gates

“An enjoyable collection that offers a glimpse into new knowledge about our universe.”—Library Journal

Thomas Lin is the founding editor-in-chief of Quanta Magazine, an online publication that reports on developments in science and mathematics, with content syndicated in publications such as Wired, The Atlantic, Scientific American and The Washington Post. Lin previously worked for The New York Times, where he edited online features and wrote about science, technology and tennis. He has also written for Quanta, The New Yorker, Tennis, and other publications.

Sean Carroll is a theoretical physicist at Caltech and the author of popular science books, including The Big Picture: On the Origins of Life, Meaning, and the Universe Itself.
Loading...
or
Not Currently Available for Direct Purchase