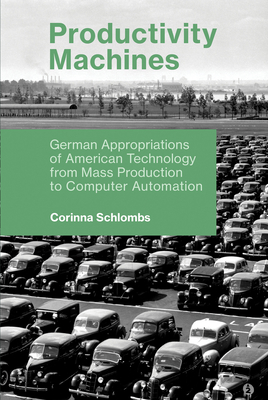 How productivity culture and technology became emblematic of the American economic system in pre- and postwar Germany.

The concept of productivity originated in a statistical measure of output per worker or per work-hour, calculated by the US Bureau of Labor Statistics. A broader productivity culture emerged in 1920s America, as Henry Ford and others linked methods of mass production and consumption to high wages and low prices. These ideas were studied eagerly by a Germany in search of economic recovery after World War I, and, decades later, the Marshall Plan promoted productivity in its efforts to help post–World War II Europe rebuild. In Productivity Machines, Corinna Schlombs examines the transatlantic history of productivity technology and culture in the two decades before and after World War II. She argues for the interpretive flexibility of productivity: different groups viewed productivity differently at different times. Although it began as an objective measure, productivity came to be emblematic of the American economic system; post-World War II West Germany, however, adapted these ideas to its own political and economic values.

Schlombs explains that West German unionists cast a doubtful eye on productivity's embrace of plant-level collective bargaining; unions fought for codetermination—the right to participate in corporate decisions. After describing German responses to US productivity, Schlombs offers an in-depth look at labor relations in one American company in Germany—that icon of corporate America, IBM. Finally, Schlombs considers the emergence of computer technology—seen by some as a new symbol of productivity but by others as the means to automate workers out of their jobs.

Corinna Schlombs is Assistant Professor in the Department of History at Rochester Institute of Technology.
Loading...
or
Not Currently Available for Direct Purchase