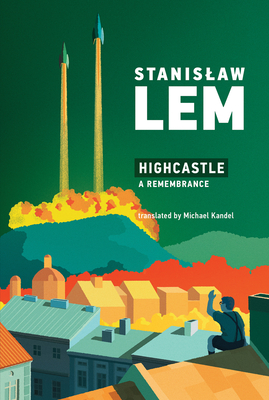 With Highcastle, Stanisław Lem offers a memoir of his childhood and youth in prewar Lvov. Reflective, artful, witty, playful—“I was a monster,” he observes ruefully—this lively and charming book describes a youth spent reading voraciously (he was especially interested in medical texts and French novels), smashing toys, eating pastries, and being terrorized by insects. Often lonely, the young Lem believed that he could communicate with household objects—perhaps anticipating the sentient machines in the adult Lem's novels. Lem reveals his younger self to be a dreamer, driven by an unbridled imagination and boundless curiosity.

In the course of his reminiscing, Lem also ponders the nature of memory, innocence, and the imagination. Highcastle (the title refers to a nearby ruin) offers the portrait of a writer in his formative years.


Praise For Highcastle: A Remembrance…

“An entire vanished world has been lovingly and quirkily recalled in this pages.”

“A charming, effervescent memoir from a writer who consistently transcends genre.”

"Reading classic SF can put current conversations in the book world in an interesting new perspective, and MIT Press' commitment to publishing the works of Stanisław Lem brings the classics back in a neatly packaged format. Highcastle in particular may be interesting to newcomers or classic fans who want to learn about the famous author's influences."

"The release of these new volumes seems to expand the possibilities of what a university publisher can do."

"Fourteen years after his death, the universe is still struggling to catch up with the vast creative force that was Stanisław Lem. And for my money, it won't be surpassing him anytime soon…Enjoying the genius of Lem requires readerly dexterity and a willingness to go wherever the author takes you…These marvelous, absorbing and often hilarious books make our weary universe seem pale and undistinguished by comparison."

"In Highcastle, Lem describes himself as a 'monster' who tore apart his toys. He recalls sneaking looks at his father’s anatomy textbooks and poking through items removed from patients’ tracheae: coins, safety pins, sprouted beans. He loved to create imaginary bureaucracies, manufacturing identity papers for nonexistent sovereigns and deeds to distant empires."

Stanisław Lem (1921–2006), a writer called “worthy of the Nobel Prize” by the New York Times, was an internationally renowned author of novels, short stories, literary criticism, and philosophical essays. His books have been translated into forty-four languages and have sold more than thirty million copies.
Loading...
or
Not Currently Available for Direct Purchase