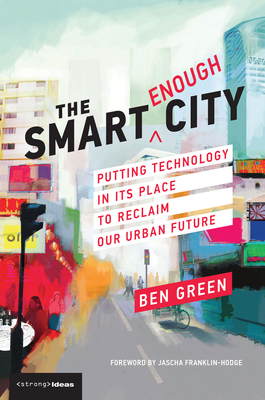 Why technology is not an end in itself, and how cities can be “smart enough,” using technology to promote democracy and equity.

Smart cities, where technology is used to solve every problem, are hailed as futuristic urban utopias. We are promised that apps, algorithms, and artificial intelligence will relieve congestion, restore democracy, prevent crime, and improve public services. In The Smart Enough City, Ben Green warns against seeing the city only through the lens of technology; taking an exclusively technical view of urban life will lead to cities that appear smart but under the surface are rife with injustice and inequality. He proposes instead that cities strive to be “smart enough”: to embrace technology as a powerful tool when used in conjunction with other forms of social change—but not to value technology as an end in itself.

In a technology-centric smart city, self-driving cars have the run of downtown and force out pedestrians, civic engagement is limited to requesting services through an app, police use algorithms to justify and perpetuate racist practices, and governments and private companies surveil public space to control behavior. Green describes smart city efforts gone wrong but also smart enough alternatives, attainable with the help of technology but not reducible to technology: a livable city, a democratic city, a just city, a responsible city, and an innovative city. By recognizing the complexity of urban life rather than merely seeing the city as something to optimize, these Smart Enough Cities successfully incorporate technology into a holistic vision of justice and equity.

Ben Green is an Affiliate and former Fellow at the Berkman Klein Center for Internet and Society at Harvard University and a PhD candidate in Applied Mathematics at Harvard's John A. Paulson School of Engineering and Applied Sciences. From 2016 to 2017 he was a Data Scientist in the City of Boston's Department of Innovation and Technology.
Loading...
or support indie stores by buying on