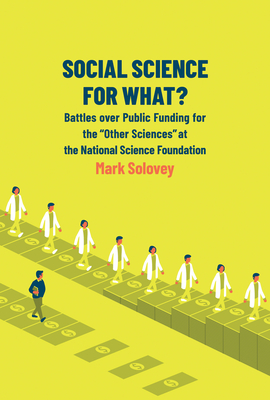 Social Science for What?

How the NSF became an important yet controversial patron for the social sciences, influencing debates over their scientific status and social relevance.

In the early Cold War years, the U.S. government established the National Science Foundation (NSF), a civilian agency that soon became widely known for its dedication to supporting first-rate science. The agency's 1950 enabling legislation made no mention of the social sciences, although it included a vague reference to “other sciences.” Nevertheless, as Mark Solovey shows in this book, the NSF also soon became a major—albeit controversial—source of public funding for them.

Solovey's analysis underscores the long-term impact of early developments, when the NSF embraced a “scientistic” strategy wherein the natural sciences represented the gold standard, and created a social science program limited to “hard-core” studies. Along the way, Solovey shows how the NSF's efforts to support scholarship, advanced training, and educational programs were shaped by landmark scientific and political developments, including McCarthyism, Sputnik, reform liberalism during the 1960s, and a newly energized conservative movement during the 1970s and 1980s. Finally, he assesses the NSF's relevance in a “post-truth” era, questions the legacy of its scientistic strategy, and calls for a separate social science agency—a National Social Science Foundation.

Solovey's study of the battles over public funding is crucial for understanding the recent history of the social sciences as well as ongoing debates over their scientific status and social value.


Praise For Social Science for What?: Battles over Public Funding for the "Other Sciences" at the National Science Foundation…

"This is the goto history tracing erratic NSF treatment of social science, which accounts for worrisome gaps in our science of the human dimensions embedded in current sociotechnological disruptive challenges. Solovey’s call for a fix is timely, and urgent."
– Kenneth Prewitt, Carnegie Professor of Public Affairs, Columbia University

"An impressive account of the fortunes of social science within the American National Science Foundation (NSF). Buttressing and chronologically extending his treatment in his book Shaky Foundations (Solovey 2013), Solovey establishes the NSF’s importance as a funding agency for postwar social science and charts the recurring and rhyming challenges social scientists and their defenders faced within and around the foundation."
– George Reisch, Metascience

"Solovey's detailed narrative history offers the reader a wealth of insight into the dynamics underlying choices surrounding the public funding of social science research and lays the groundwork for many future investigations into the broader politics of social scientific knowledge."
– Daniel Hirschman, Journal of the History of Economic Thought

"This book enables the reader to develop a much richer understanding of the NSF, which is not only one essential part of the federal science funding system but also the major source of federal backing for social sciences."
– Jialu Xie, Minerva

"Solovey's book represents a major contribution to the history of the human sciences in the United States duringthe 20th century." "A must read"
– Dennis Bryson, Centaurus

Mark Solovey is Associate Professor in the Institute for the History and Philosophy of Science and Technology at the University of Toronto. He is the author of Shaky Foundations: The Politics-Patronage-Social Science Nexus in Cold War America.
Loading...
or
Not Currently Available for Direct Purchase