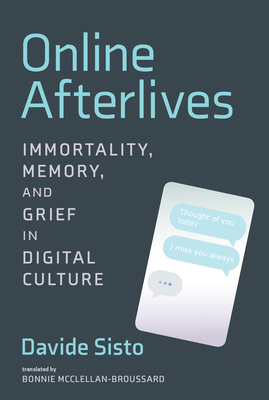 How digital technology—from Facebook tributes to QR codes on headstones—is changing our relationship to death.

Facebook is the biggest cemetery in the world, with countless acres of cyberspace occupied by snapshots, videos, thoughts, and memories of people who have shared their last status updates. Modern society usually hides death from sight, as if it were a character flaw and not an ineluctable fact. But on Facebook and elsewhere on the internet, we can't avoid death; digital ghosts—electronic traces of the dead—appear at our click or touch. On the Internet at least, death has once again become a topic for public discourse. In Online Afterlives, Davide Sisto considers how digital technology is changing our relationship to death.

Sisto describes the various modes of digital survival after biological death—including Facebook tributes, chatbots programmed to speak in the voice of a dead person, and QR codes on headstones—and discusses their philosophical ramifications. Sisto reports on such phenomena as the Tweet Hereafter, a website that collects people's last tweets; the intimacy of sending a WhatsApp message to someone who has died; and digital cremation, the deactivation of a dead person's account. Because we can mingle with the dead online almost as we mingle with the living, he warns, we may find it difficult to distinguish communication at a distance from communication with the dead.
The digital afterlife has restored the communal dimension of death, rescuing both mourners and the mourned from social isolation. A society willing to engage with death and mortality, Sisto argues, is a more balanced and mature society.

"Sisto takes the reader on a whirlwind journey through philosophical concepts, fictions, legal cases and digital data service providers that all combine to create the contemporary fascination with death, legacy, and immortality! A must-read for the curious mind." – Stacey Pitsillides, Vice-Chancellor’s Senior Research Fellow, School of Design, Northumbria University

"…an eye-opening study of an underexamined aspect of the internet age." — Publishers Weekly

Davide Sisto, a philosopher and authority on thanatechnology, is a Researcher in Theoretical Philosophy at the University of Turin.
Loading...
or support indie stores by buying on