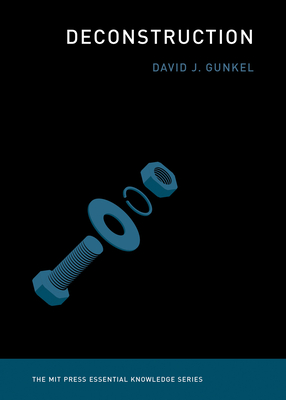 An accessible introduction to a concept often considered impossibly abstruse, demonstrating its power as a conceptual tool in the twenty-first century.

This volume in the MIT Press Essential Knowledge series offers a clear and concise introduction to a topic often considered difficult and abstruse: deconstruction. David Gunkel sorts out the concept, terminology, and practices of deconstruction, not to defend academic orthodoxy, or to disseminate the thought of Jacques Derrida--the fabricator of the neologism and progenitor of the concept--but to provide readers with a powerful conceptual tool for the twenty-first century.

Gunkel explains that deconstruction is not simply the opposite of construction--the "deconstructed" jacket hanging in your closet is not, strictly speaking, accurately named--or synonymous with destruction. It is a way to think beyond the construction/destruction dichotomy and all other conceptual dichotomies and logical oppositions. After describing what deconstruction is not, and developing an abstract and schematic characterization derived from Derrida, Gunkel offers examples in (rather than of) deconstruction, including logocentrism (the speech/writing dichotomy) and virtuality (the ruling philosophical binary of real/appearance), remix (the original/copy distinction), and the posthuman figure of the cyborg (the human/machine conceptual pairing). Finally, Gunkel discusses the costs and benefits of deconstruction, considering the many things deconstruction is good for and identifying potential problems, including Eurocentrism, relativism, difficulties in communicating the concept, and reappropriation.

David J. Gunkel is Distinguished Teaching Professor in the Department of Communication at Northern Illinois University. He is the author of The Machine Question, Of Remixology, Robot Rights (all published by the MIT Press), and other books.
Loading...
or support indie stores by buying on