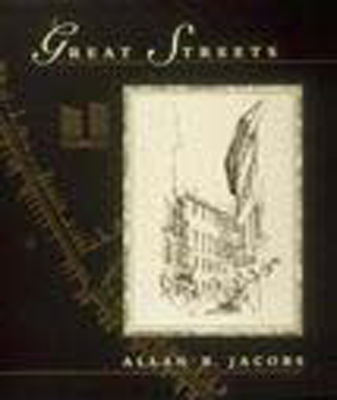 Which are the world's best streets, and what are the physical, designable characteristics that make them great? To answer these questions, Allan Jacobs has surveyed street users and design professionals and has studied a wide array of street types and urban spaces around the world. With more than 200 illustrations, all prepared by the author, along with analysis and statistics, Great Streets offers a wealth of information on street dimensions, plans, sections, and patterns of use, all systematically compared. It also reveals Jacobs's eye for the telling human and social details that bring streets and communities to life.

An extensive introduction discusses the importance of streets in creating communities and criteria for identifying the best streets. The essays that follow examine 15 particularly fine streets, ranging from medieval streets in Rome and Copenhagen to Venice's Grand Canal, from Parisian boulevards to tree-lined residential streets in American cities. Jacobs also looks at several streets that were once very fine but are less successful today, such as Market Street in San Francisco, identifying the factors that figure in their decline.

To broaden his coverage, Jacobs adds briefer treatments of more than 30 other streets arranged by street type, including streets from Australia, Japan, and classical antiquity in addition to European and North American examples. For each of these streets he has prepared plans, sections, and maps, all drawn at the same scales to facilitate comparisons, along with perspective views and drawings of significant design details.

Another remarkable feature of this book is a set of 50 one square-mile maps, each reproduced at the same scale, of the street plans of representative cities around the world. These reveal much about the texture of the cities' street patterns and hence of their urban life. Jacobs's analysis of the maps adds much original data derived from them, including changes of street patterns over time.

Jacobs concludes by summarizing the practical design qualities and strategies that have contributed most to the making of great streets.