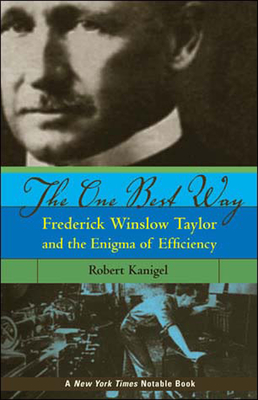 The One Best Way

Frederick Winslow Taylor and the Enigma of Efficiency

The definitive biography of the first "efficiency expert."

Frederick Winslow Taylor (1856-1915) was the first efficiency expert, the original time-and-motion man—the father of scientific management, the inventor of a system that became known, inevitably enough, as Taylorism. "In the past the man has been first. In the future the System will be first," he predicted boldly, and accurately. Taylor bequeathed to us, writes Robert Kanigel in this definitive biography, a clockwork world of tasks timed to the hundredth of a minute. Taylor helped instill in us the obsession with time, order, productivity, and efficiency that marks our age. His influence can be seen in factories, schools, offices, hospitals, libraries, even kitchen design. At the peak of his celebrity in the early twentieth century, Taylor gave lectures around the country and was as famous as Edison or Ford. To organized labor, he was a slave driver; to the bosses, he was an eccentric and a radical. To himself, he was a misunderstood visionary whose "one best way" would bring prosperity to worker and boss alike. Robert Kanigel's compelling chronicle takes Taylor from privileged Philadelphia childhood to factory floor to international fame, telling the story of a paradigmatic American figure whose influence would be felt from the New Deal to Soviet Russia and remains pervasive—even insidious—today.


Praise For The One Best Way: Frederick Winslow Taylor and the Enigma of Efficiency…

An expansive and illuminating biography of both the man and the gritty industrial world he inhabited.—The New York Times—

Robert Kanigel is Professor of Science Writing and Director of the Graduate Program in Science Writing at MIT and the author of Apprentice to Genius and The Man Who Knew Infinity. His articles, essays, and reviews have appeared in The New York Times Magazine, The New York Times Book Review, Wilson Quarterly, and Psychology Today.
Loading...
or support indie stores by buying on