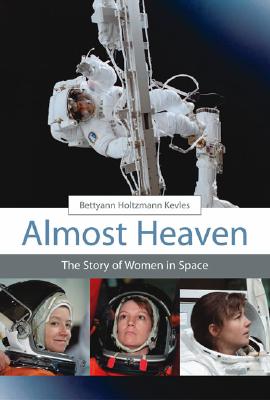 The Story of Women in Space

The stories of the remarkable women who have bravely met two challenges: the risk of space travel and the struggle to succeed in a man's world.

Almost Heaven tells the stories of the remarkable women who have bravely met two challenges: the risk of space travel and the struggle to succeed in a man's world. From Valentina Tereshkova in 1963 and Sally Ride in 1983 to Kalpana Chawla and Lauren Clark on the last flight of the Columbia, these women made history. Bettyann Holtzmann Kevles brings the women of space to life in this fascinating book, describing what motivates them, the pioneers who paved the way for them, and how their presence in the astronaut corps changed NASA. Setting her story against the background of the Cold War and the women's movement of the 1960s and 1970s, Kevles takes us from Cape Canaveral to Star City in Russia and back. She describes the years of rejection before women were allowed to train as astronauts in the U.S. space program and the problems that female cosmonauts encountered in the U.S.S.R.

Kevles talks to the first women chosen by NASA to be astronauts in 1978 and to many women who have followed them. These women, she shows, have not only broken down barriers to join the most exclusive men's club in the world--the space program--they have become players in the greatest adventure of our time, the human exploration of space. This paperback edition includes Kevles's thoughts on the 2005 Discovery mission and other recent developments in the space program as well as her reflections on the role of female astronauts today, and perhaps tomorrow.

Bettyann Holtzmann Kevles recently held the Charles A. Lindbergh Chair at the National Air and Space Museum in Washington, DC, and now teaches in the Department of History at Yale University. Her works include Naked to the Bone: Meidical Imaging in the Twentieth Century.
Loading...
or
Not Currently Available for Direct Purchase