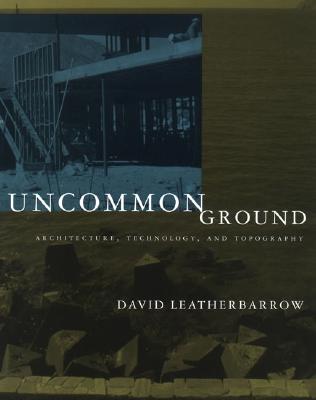 How building and site, technology and topography, interact to create successful buildings and resolve theoretical issues in practice.

Although both are central to architecture, siting and construction are often treated as separate domains. In Uncommon Ground, David Leatherbarrow illuminates their relationship, focusing on the years between 1930 and 1960, when utopian ideas about the role of technology in building gave way to an awareness of its disruptive impact on cities and culture. He examines the work of three architects, Richard Neutra, Antonin Raymond, and Aris Konstantinidis, who practiced in the United States, Japan, and Greece respectively.Leatherbarrow rejects the assumption that buildings of the modern period, particularly those that used the latest technology, were designed without regard to their surroundings. Although the prefabricated elements used in the buildings were designed independent of siting considerations, architects used these elements to modulate the environment. Leatherbarrow shows how the role of walls, the traditional element of architectural definition and platform partition, became less significant than that of the platforms themselves, the floors, ceilings, and intermediate levels. He shows how frontality was replaced by the building's four-sided extension into its surroundings, resulting in frontal configurations previously characteristic of the back. Arguing that the boundary between inside and outside was radically redefined, Leatherbarrow challenges cherished notions about the autonomy of the architectural object and about regional coherence. Modern architectural topography, he suggests, is an interplay of buildings, landscapes, and cities, as well as the humans who use them. The conflict between technological progress and cultural continuity, Leatherbarrow claims, exists only in theory, not in the real world of architecture. He argues that the act of building is not a matter of restoring regional identity by re-creating familiar signs, but of incorporating construction into the process of topography's perpetual becoming.

John Hollerbach is an Associate Professor in the MIT Department of Brain and Cognitive Sciences and the MIT Artificial Intelligence Laboratory.
Loading...
or
Not Currently Available for Direct Purchase