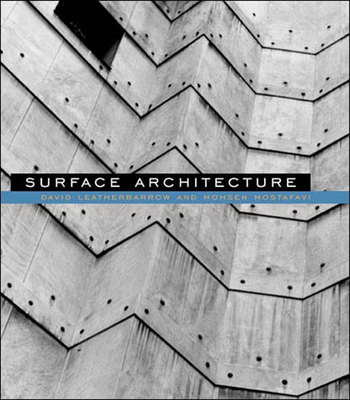 A study of the building surface, architecture's primary instrument of identity and engagement with its surroundings.

Visually, many contemporary buildings either reflect their systems of production or recollect earlier styles and motifs. This division between production and representation is in some ways an extension of that between modernity and tradition. In this book, David Leatherbarrow and Mohsen Mostafavi explore ways that design can take advantage of production methods such that architecture is neither independent of nor dominated by technology. Leatherbarrow and Mostafavi begin with the theoretical and practical isolation of the building surface as the subject of architectural design. The autonomy of the surface, the "free facade," presumes a distinction between the structural and nonstructural elements of the building, between the frame and the cladding. Once the skin of the building became independent of its structure, it could just as well hang like a curtain, or like clothing. The focus of the relationship between structure and skin is the architectural surface. In tracing the handling of this surface, the authors examine both contemporary buildings and those of the recent past. Architects discussed include Albert Kahn, Ludwig Mies van der Rohe, Alison and Peter Smithson, Alejandro de la Sota, Robert Venturi, Jacques Herzog, and Pierre de Meuron. The properties of a building's surface—whether it is made of concrete, metal, glass, or other materials—are not merely superficial; they construct the spatial effects by which architecture communicates. Through its surfaces a building declares both its autonomy and its participation in its surroundings.

Meticulously and beautifully conceived and presented, Surface Architecture rewards reading and re-reading, inspiring the pursuit of new possibilities in the creation of architecture.—Bobby Open, The Architectural Review—

Surface Architecture shows that attention to surfaces does not necessarily equate with a lack of depth.

This should be required reading for any architect.

David Leatherbarrow is Professor of Architecture and Chairman of the Graduate Group in Architecture at the University of Pennsylvania.

Mohsen Mostafavi is Dean of the Graduate School of Design at Harvard University.
Loading...
or
Not Currently Available for Direct Purchase