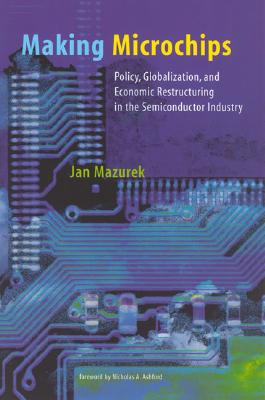 Policy, Globalization, and Economic Restructuring in the Semiconductor Industry (Urban and Industrial Environments)

An examination of the environmental and economic implications of the computer microchip industry's exodus from California's Silicon Valley to New Mexico, Virginia, Ireland, and Taiwan.

In Making Microchips, Jan Mazurek examines the environmental and economic implications of the computer microchip industry's exodus from California's Silicon Valley to New Mexico, Virginia, Ireland, and Taiwan. Globalization, economic restructuring, and changing manufacturing processes in this rapidly growing industry present difficult new questions for environmental policy. Mazurek challenges the assumptions of U.S. policies designed to promote the competitiveness of domestic microchip makers. She argues that, although these initiatives focus on the economic effects of environmental regulation, they fail to acknowledge how economic and organizational changes within the industry collide with and often confound efforts to monitor and manage pollution from chemicals used in microchip manufacturing.

Despite its reputation as a clean industry, microchip manufacturing is fraught with hazards. More than sixty dangerous acids, solvents, caustics, and gases are used to make microchips, and some of them are suspected to be carcinogens and/or reproductive toxins. Mazurek describes the environmental by-products of chipmaking, including soil contamination, air and water pollution, and damage to human health. Applying insights from economic geography to questions of how and where companies organize production, she shows how Silicon Valley played a pivotal role in the development of the microchip. Pairing federal environmental data with structural and geographic information on the six firms that continue to build wafer fabrication plants in the United States, she demonstrates how reorganization and relocation of manufacturing facilities divert attention from trends in toxic emissions and how they complicate public and private efforts to improve the industry's environmental performance. In the concluding chapter, Mazurek marshals her findings in a broader analysis of the expansion of global manufacturing and the resultant environmental problems.

Jan Mazurek directs the Center for Innovation and Policy at the Progresive Policy Institute in Washington, DC. She is the coauthor (with J. Clarence Davies) of Pollution Control in the United States: Evaluating the System.
Loading...
or support indie stores by buying on
(This book is on backorder)