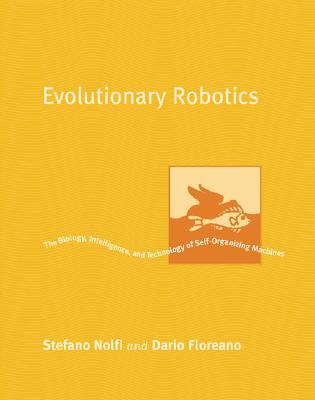 The Biology, Intelligence, and Technology of Self-Organizing Machines (Intelligent Robots and Autonomous Agents)

Evolutionary robotics is a new technique for the automatic creation of autonomous robots. Inspired by the Darwinian principle of selective reproduction of the fittest, it views robots as autonomous artificial organisms that develop their own skills in close interaction with the environment and without human intervention. Drawing heavily on biology and ethology, it uses the tools of neural networks, genetic algorithms, dynamic systems, and biomorphic engineering. The resulting robots share with simple biological systems the characteristics of robustness, simplicity, small size, flexibility, and modularity.In evolutionary robotics, an initial population of artificial chromosomes, each encoding the control system of a robot, is randomly created and put into the environment. Each robot is then free to act (move, look around, manipulate) according to its genetically specified controller while its performance on various tasks is automatically evaluated. The fittest robots then reproduce by swapping parts of their genetic material with small random mutations. The process is repeated until the birth of a robot that satisfies the performance criteria.

This book describes the basic concepts and methodologies of evolutionary robotics and the results achieved so far. An important feature is the clear presentation of a set of empirical experiments of increasing complexity. Software with a graphic interface, freely available on a Web page, will allow the reader to replicate and vary (in simulation and on real robots) most of the experiments.