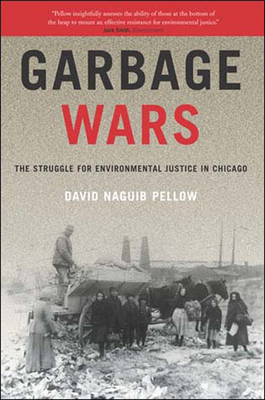 The Struggle for Environmental Justice in Chicago (Urban and Industrial Environments)

A study of the struggle for environmental justice, focusing on conflicts over solid waste and pollution in Chicago.

In Garbage Wars, the sociologist David Pellow describes the politics of garbage in Chicago. He shows how garbage affects residents in vulnerable communities and poses health risks to those who dispose of it. He follows the trash, the pollution, the hazards, and the people who encountered them in the period 1880-2000. What unfolds is a tug of war among social movements, government, and industry over how we manage our waste, who benefits, and who pays the costs.

By highlighting conflicts over waste dumping, incineration, landfills, and recycling, Pellow provides a historical view of the garbage industry throughout the life cycle of waste. Although his focus is on Chicago, he places the trends and conflicts in a broader context, describing how communities throughout the United States have resisted the waste industry's efforts to locate hazardous facilities in their backyards. The book closes with suggestions for how communities can work more effectively for environmental justice and safe, sustainable waste management.


Praise For Garbage Wars: The Struggle for Environmental Justice in Chicago (Urban and Industrial Environments)…

...insightfully assesses the ability of those at the bottom of the heap to mount an effective resistance for environmental justice.—Environment—

...An indispensable book for anyone interested in waste...or the continued effects of racism and classism in American society.

David Naguib Pellow is Don A. Martindale Endowed Chair in Sociology at the University of Minnesota. Among his books are the award-winning Garbage Wars: The Struggle for Environmental Justice in Chicago (MIT Press, 2002) and Power, Justice, and the Environment: A Critical Appraisal of the Environmental Justice Movement (coedited with Robert Brulle; MIT Press, 2005.)
Loading...
or
Not Currently Available for Direct Purchase