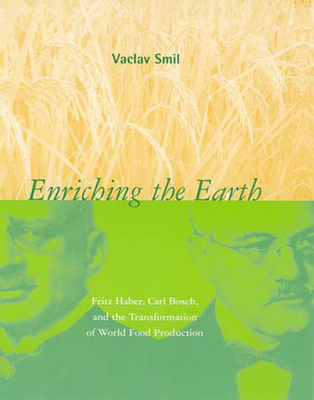 Dr. Smil is the world's authority on nitrogenous fertilizer.

The industrial synthesis of ammonia from nitrogen and hydrogen has been of greater fundamental importance to the modern world than the invention of the airplane, nuclear energy, space flight, or television. The expansion of the world's population from 1.6 billion people in 1900 to today's six billion would not have been possible without the synthesis of ammonia.

In Enriching the Earth, Vaclav Smil begins with a discussion of nitrogen's unique status in the biosphere, its role in crop production, and traditional means of supplying the nutrient. He then looks at various attempts to expand natural nitrogen flows through mineral and synthetic fertilizers. The core of the book is a detailed narrative of the discovery of ammonia synthesis by Fritz Haber--a discovery scientists had sought for over one hundred years--and its commercialization by Carl Bosch and the chemical company BASF. Smil also examines the emergence of the large-scale nitrogen fertilizer industry and analyzes the extent of global dependence on the Haber-Bosch process and its biospheric consequences. Finally, it looks at the role of nitrogen in civilization and, in a sad coda, describes the lives of Fritz Haber and Carl Bosch after the discovery of ammonia synthesis.

Vaclav Smil is the author of more than thirty books on energy, the environment, food, and the history of technical advances, including Harvesting the Biosphere: What We Have Taken from Nature, published by the MIT Press. He is a Distinguished Professor Emeritus at the University of Manitoba. In 2010 he was named by Foreign Policy as one of the Top 100 Global Thinkers.
or
Not Currently Available for Direct Purchase
Copyright © 2020 American Booksellers Association