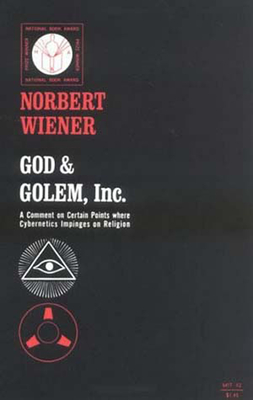 A Comment on Certain Points Where Cybernetics Impinges on Religion

The new and rapidly growing field of communication sciences owes as much to Norbert Wiener as to any one man. He coined the word for it--cybernetics. In God & Golem, Inc., the author concerned himself with major points in cybernetics which are relevant to religious issues.The first point he considers is that of the machine which learns. While learning is a property almost exclusively ascribed to the self-conscious living system, a computer now exists which not only can be programmed to play a game of checkers, but one which can learn from its past experience and improve on its own game. For a time, the machine was able to beat its inventor at checkers. It did win, writes the author, and it did learn to win; and the method of its learning was no different in principle from that of the human being who learns to play checkers.

A second point concerns machines which have the capacity to reproduce themselves. It is our commonly held belief that God made man in his own image. The propagation of the race may also be interpreted as a function in which one living being makes another in its own image. But the author demonstrates that man has made machines which are very well able to make other machines in their own image, and these machine images are not merely pictorial representations but operative images. Can we then say: God is to Golem as man is to Machines? in Jewish legend, golem is an embryo Adam, shapeless and not fully created, hence a monster, an automation.The third point considered is that of the relation between man and machine. The concern here is ethical. render unto man the things which are man's and unto the computer the things which are the computer's, warns the author. In this section of the book, Dr. Wiener considers systems involving elements of man and machine. The book is written for the intellectually alert public and does not involve any highly technical knowledge. It is based on lectures given at Yale, at the Soci t Philosophique de Royaumont, and elsewhere.

Norbert Wiener (1894-1964) served on the faculty in the Department of Mathematics at MIT from 1919 until his death. In 1963, he was awarded the National Medal of Science for his contributions to mathematics, engineering, and biological sciences. He was the author of many books, including Norbert Wiener--A Life in Cybernetics and the National Book Award-winning God & Golem, Inc.: A Comment on Certain Points Where Cybernetics Impinges on Religion (both published by the MIT Press).
Loading...
or support indie stores by buying on