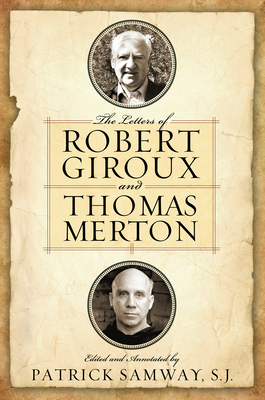 The Letters of Robert Giroux and Thomas Merton (Paperback)

From the time they first met as undergraduates at Columbia College in New York City in the mid-1930s, the noted editor Robert Giroux (1914-2008) and the Trappist monk and writer Thomas Merton (1915-1968) became friends. The Letters of Robert Giroux and Thomas Merton capture their personal and professional relationship, extending from the time of the publication of Merton's 1948 best-selling spiritual autobiography, The Seven Storey Mountain, until a few months before Merton's untimely death in December 1968. As editor-in-chief at Harcourt, Brace & Company and then at Farrar, Straus & Giroux, Giroux not only edited twenty-six of Merton's books but served as an adviser to Merton as he dealt with unexpected problems with his religious superiors at the Abbey of Our Lady of Gethsemani in Kentucky, as well as those in France and Italy.

These letters, arranged chronologically, offer invaluable insights into the publishing process that brought some of Merton's most important writings to his readers. Patrick Samway, S.J., had unparalleled access not only to the materials assembled here but to Giroux's unpublished talks about Merton, which he uses to his advantage, especially in his beautifully crafted introduction that interweaves the stories of both men with a chronicle of their personal and collaborative relationship. The result is a rich and rewarding volume, which shows how Giroux helped Merton to become one of the greatest spiritual writers of the twentieth century.

Patrick Samway, S.J., professor emeritus of English at St. Joseph's University in Philadelphia, is the author or editor/co-editor of twelve books, including Walker Percy: A Life, selected by the New York Times Book Review as one of the notable books of 1997.
or support indie stores by buying on
Copyright © 2020 American Booksellers Association