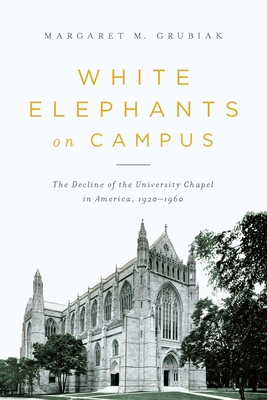 In White Elephants on Campus: The Decline of the University Chapel in America, 1920-1960, Margaret M. Grubiak persuasively argues, through a careful selection of case studies, that the evolution of the architecture of new churches and chapels built on campuses reveals the shifting and declining role of religion within the mission of the modern American university. According to Grubiak, during the first half of the twentieth century, university leaders tended to view architecture as a means of retaining religion within an increasingly scientific and secular university. Initially, the construction of large-scale chapels was meant to advertise religion's continued importance to the university mission. Lavish neo-Gothic chapels at historically Protestant schools, although counter to traditional Protestant imagery, were justified as an appeal to students' emotions. New cathedral-style libraries and classroom buildings also re-imagined a place for religion on campuses no longer tied to their founding religious denominations. Despite such attempts to reframe religion for the modern university, Grubiak shows that by the 1960s the architectural styles of new religious buildings had changed markedly. Postwar university chapels projected a less distinct image, with their small scale and intentionally nondenominational focus. By the mid-twentieth century, the prewar chapels had become white elephants. They are beautiful, monumental buildings that nevertheless stand outside the central concerns of the modern American university. Religious campus architecture had lost its value in an era where religion no longer played a central role in the formation and education of the American student. White Elephants on Campus is a provocative and engaging look at the university campus chapel in the twentieth century. The author skillfully combines social, educational, religious, and architectural history to illuminate a phenomenon neglected both by scholars and its intended users. --Peter W. Williams, emeritus, Miami University In this important new book, Margaret Grubiak tells the fascinating story of how religion declined on twentieth-century American campuses and yet, at the same time, administrators persisted in building college chapels, including some of great size and striking architectural merit. This well-written and thoroughly researched account reveals much about American architecture but even more about the larger cultural retreat from Protestantism by the nation's intellectual elites. We have long needed such a study, and Grubiak has done a masterful job in presenting it. --W. Barksdale Maynard, Princeton University--Peter W. Williams, emeritus, Miami University.