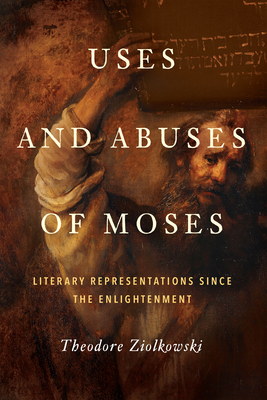 Uses and Abuses of Moses

Literary Representations Since the Enlightenment

In Uses and Abuses of Moses, Theodore Ziolkowski surveys the major literary treatments of the biblical figure of Moses since the Enlightenment. Beginning with the influential treatments by Schiller and Goethe, for whom Moses was, respectively, a member of a mystery cult and a violent murderer, Ziolkowski examines an impressive array of dramas, poems, operas, novels, and films to show the many ways in which the charismatic figure of Moses has been exploited--the "uses and abuses" of the title--to serve a variety of ideological and cultural purposes. Ziolkowski's wide-ranging and in-depth study compares and analyzes the attempts by nearly one hundred writers to fill in the gaps in the biblical account of Moses' life and to explain his motivation as a leader, lawgiver, and prophet. As Ziolkowski richly demonstrates, Moses' image has been affected by historical factors such as the Egyptomania of the 1820s, the revolutionary movements of the mid-nineteenth century, the early move toward black liberation in the United States, and critical biblical scholarship of the late nineteenth century before, in the twentieth century, being appropriated by Marxists, Socialists, Nazis, and Freudians. The majority of the works studied are by Austro-German and Anglo-American writers, but Ziolkowski also includes significant examples of works from Hungary, Sweden, Norway, the Ukraine, Denmark, the Netherlands, Italy, and France. The figure of Moses becomes an animate seismograph, in Ziolkowski's words, through whose literary reception we can trace many of the shifts in the cultural landscape of the past two centuries.

Theodore Ziolkowski is professor emeritus of German and comparative literature at Princeton University.
Loading...
or support indie stores by buying on