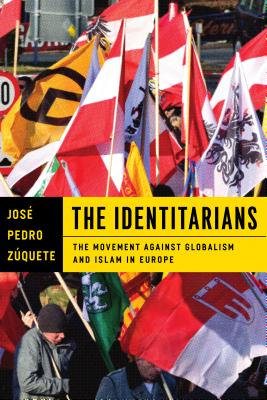 The Movement Against Globalism and Islam in Europe

The Identitarians are a quickly growing ethnocultural transnational movement that, in diverse forms, originated in France and Italy and has spread into southern, central, and northern Europe. This timely and important study presents the first book-length analysis of this anti-globalist and anti-Islamic movement. Jos Pedro Z quete, one of the leading experts in this field, studies intellectuals, social movements, young activists, and broader trends to demonstrate the growing strength and alliances among these once disparate groups fighting against perceived Islamic encroachment and rising immigration. The Identitarian intellectual and activist uprising has been a source of inspiration beyond Europe, and Z quete ties the European experience to the emerging American Alt Right, in the limelight for their support of President Trump and recent public protests on university campuses across the United States.

Z quete presents the multifaceted Identitarian movement on its own terms. He delves deep into the Identitarian literature and social media, covering different geographic contexts and drawing from countless primary sources in different European languages, while simultaneously including many firsthand accounts, testimonies, and interviews with theorists, sympathizers, and activists. The Identitarians investigates a phenomenon that will become increasingly visible on both sides of the Atlantic as European societies become more multicultural and multiethnic, and as immigration from predominantly Muslim nations continues to grow. The book will be of interest to Europeanists, political scientists, sociologists, and general readers interested in political extremism and contemporary challenges to liberal democracies.