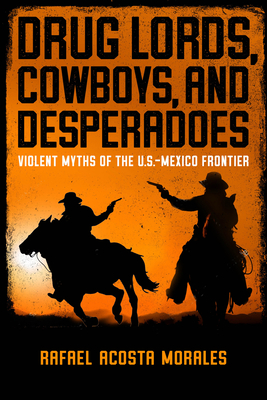 Drug Lords, Cowboys, and Desperadoes examines how historical archetypes in violent narratives on the Mexican American frontier have resulted in political discourse that feeds back into real violence.

The drug battles, outlaw culture, and violence that permeate the U.S.-Mexican frontier serve as scenery and motivation for a wide swath of North American culture. In this innovative study, Rafael Acosta Morales ties the pride that many communities felt for heroic tales of banditry and rebels to the darker repercussions of the violence inflicted by the representatives of the law or the state. Narratives on bandits, cowboys, and desperadoes promise redistribution, regeneration, and community, but they often bring about the very opposite of those goals. This paradox is at the heart of Acosta Morales's book.

Drug Lords, Cowboys, and Desperadoes examines the relationship between affect, narrative, and violence surrounding three historical archetypes--social bandits (often associated with the drug trade), cowboys, and desperadoes--and how these narratives create affective loops that recreate violent structures in the Mexican American frontier. Acosta Morales analyzes narrative in literary, cinematic, and musical form, examining works by Am rico Paredes, Luis G. Incl n, Clint Eastwood, Rolando Hinojosa, Yuri Herrera, and Cormac McCarthy. The book focuses on how narratives of Mexican social banditry become incorporated into the social order that bandits rose against and how representations of violence in the U.S. weaponize narratives of trauma in order to justify and expand the violence that cowboys commit. Finally, it explains the usage of universality under the law as a means of criminalizing minorities by reading the stories of Mexican American men who were turned into desperadoes by the criminal law system.

Drug Lords, Cowboys, and Desperadoes demonstrates how these stories led to recreated violence and criminalization of minorities, a conversation especially important during this time of recognizing social inequality and social injustices. The book is part of a growing body of scholarship that applies theoretical approaches to borderlands studies, and it will be of interest to students and scholars in American and Mexican history and literature, border studies, literary criticism, cultural criticism, and related fields.

Rafael Acosta Morales is assistant professor of Spanish at the University of Kansas and a contributor to Modern Mexican Culture.
Loading...
or support indie stores by buying on