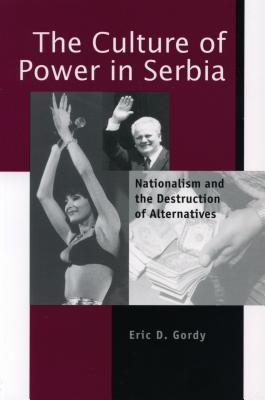 The Culture of Power in Serbia

Nationalism and the Destruction of Alternatives (Post-Communist Cultural Studies)

How does the regime of Slobodan Milosevic and his Socialist Party of Serbia (SPS) remain in power? Since legitimizing its power in 1990, the SPS has never received a majority of votes in an election. Furthermore, it has been defeated in three military conflicts, produced more than 500,000 refugees, presided over the most extreme hyperinflation in modern times, and failed in its original defining promise to see all Serbs in one state. In The Culture of Power in Serbia, Eric Gordy explores how the Milosevic government prolongs its tenure despite failures and setbacks that would have brought down most other regimes.

Gordy finds the answer in everyday life. The Milosevic regime has largely succeeded in making alternatives to its rule unavailable. By controlling key aspects of daily life, including politics, media, and popular music, it has undermined opposition by closing off alternative voices. The result is an atmosphere in which people feel they have lost control over their private life and cultural environment.

Nevertheless, Gordy finds reason to be optimistic about the long-term prospects for Serbia. The regime's forays into popular music have largely failed, and it has had only partial success in controlling the media, suggesting that the present strategy will not work forever. In Gordy's judgment, the Milosevic regime has a limited future.

The Culture of Power in Serbia provides fresh perspective for readers interested in contemporary Eastern Europe, in the strategies and tactics of authoritarian regimes, in the sociology of everyday life, and in the political potential of culture.

Eric Gordy is Assistant Professor of Sociology at Clark University. His articles have been published in the journals Problems of Post-Communism, Popular Music, and Pacific News Service.
Loading...
or support indie stores by buying on