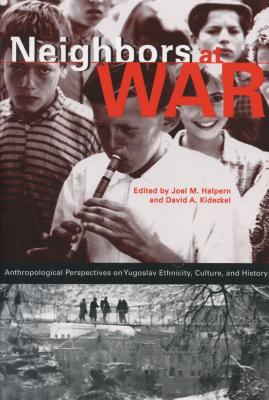 By David A. Kideckel (Editor)

Before the former Yugoslavia was divided by wars, its inhabitants successfully lived side by side in peace. This collection seeks to explain how former neighbors became enemies, with the hope that understanding what drove these peoples apart will help us discover ways for them to coexist in peace again.

Contributors analyze political cartoons, psychiatry, the arts, visual media, and law to present a diversity of views on the conflicts in Yugoslavia. While the chapters in this book deal with regional developments, they are not so much focused on politics as they are concerned with how values and attitudes are altered and new identities formed. Thus, this volume goes beyond recent journalistic accounts and should remain relevant for years to come.

This book began as a special issue of the journal Anthropology of East Europe Review. Most of the contributors to that issue have revised their chapters for this collection, and new chapters have been added, including one on the recent war in Kosovo. Essays range across all of former Yugoslavia, emphasizing the variability and diversity of ethnic relations throughout its history.

Joel Halpern is Professor Emeritus of Anthropology at the University of Massachusetts Amherst. His previous books include A Serbian Village in Historical Perspective, The Changing Village Community, The Changing Peasantry of Eastern Europe, and The Far East Comes Near.David Kideckel is Professor and Chair of the Department of Anthropology at Central Connecticut State University. His previous books include East European Communities: Seeking Balance in Turbulent Times and The Solitude of Collectivism: Romanian Villagers to the Revolution and Beyond.The editors have previously collaborated in a review of the state of East Europeanist anthropology published in the Annual Review of Anthropology and the Special Issue on "War Among the Yugoslavs" published by the Anthropology of East Europe Review.
or
Not Currently Available for Direct Purchase
Copyright © 2020 American Booksellers Association