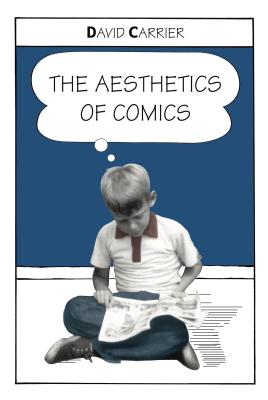 The Aesthetics of Comics (Paperback)

From Gary Larson's The Far Side to George Herriman's Krazy Kat, comic strips have two obvious defining features. They are visual narratives, using both words and pictures to tell stories, and they use word balloons to represent the speech and thought of depicted characters. Art historians have studied visual artifacts from every culture; cultural historians have recently paid close attention to movies. Yet the comic strip, an art form known to everyone, has not yet been much studied by aestheticians or art historians. This is the first full-length philosophical account of the comic strip.

Distinguished philosopher David Carrier looks at popular American and Japanese comic strips to identify and solve the aesthetic problems posed by comic strips and to explain the relationship of this artistic genre to other forms of visual art. He traces the use of speech and thought balloons to early Renaissance art and claims that the speech balloon defines comics as neither a purely visual nor a strictly verbal art form, but as something radically new. Comics, he claims, are essentially a composite art that, when successful, seamlessly combine verbal and visual elements.

Carrier looks at the way an audience interprets comics and contrasts the interpretation of comics and other mass-culture images to that of Old Master visual art. The meaning behind the comic can be immediately grasped by the average reader, whereas a piece of museum art can only be fully interpreted by scholars familiar with the history and the background behind the painting. Finally, Carrier relates comics to art history. Ultimately, Carrier's analysis of comics shows why this popular art is worthy of philosophical study and proves that a better understanding of comics will help us better understand the history of art.

David Carrier is Professor of Philosophy at Carnegie Mellon University. He is the author of many books, including Principles of Art History Writing (1991), The Aesthete in the City: The Philosophy and Practice of American Abstract Painting in the 1980s (1994), and High Art: Charles Baudelaire and the Origins of Modernist Painting (1996), all from Penn State Press.
or support indie stores by buying on
Copyright © 2020 American Booksellers Association