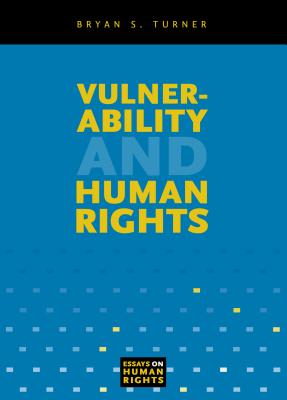 The mass violence of the twentieth century's two world wars--followed more recently by decentralized and privatized warfare, manifested in terrorism, ethnic cleansing, and other localized forms of killing--has led to a heightened awareness of human beings' vulnerability and the precarious nature of the institutions they create to protect themselves from violence and exploitation. This vulnerability, something humans share amid the diversity of cultural beliefs and values that mark their differences, provides solid ground on which to construct a framework of human rights.

Bryan Turner undertakes this task here, developing a sociology of rights from a sociology of the human body. His blending of empirical research with normative analysis constitutes an important step forward for the discipline of sociology. Like anthropology, sociology has traditionally eschewed the study of justice as beyond the limits of a discipline that pays homage to cultural relativism and the "value neutrality" of positivistic science. Turner's expanded approach accordingly involves a truly interdisciplinary dialogue with the literature of economics, law, medicine, philosophy, political science, and religion.

Bryan S. Turner is Director of the Committee for the Study of Religion and Presidential Professor of Sociology at the CUNY Graduate Center, as well as Director of the Centre for the Study of Contemporary Muslim Societies and Professor of Social and Political Thought at the University of Western Sydney. Among his many publications are the Penguin Dictionary of Sociology, Blackwell Companion to Social Theory, and Sage Handbook of Sociology.
Loading...
or support indie stores by buying on