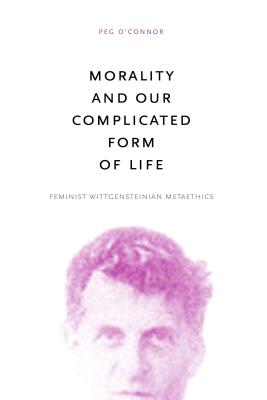 Morality and Our Complicated Form of Life

Moral philosophy, like much of philosophy generally, has been bedeviled by an obsession with seeking secure epistemological foundations and with dichotomies between mind and body, fact and value, subjectivity and objectivity, nature and normativity. These are still alive today in the realism-versus-antirealism debates in ethics. Peg O'Connor draws inspiration from the later Wittgenstein's philosophy to sidestep these pitfalls and develop a new approach to the grounding of ethics (i.e., metaethics) that looks to the interconnected nature of social practices, most especially those that Wittgenstein called "language games." These language games provide structure and stability to our moral lives while they permit the flexibility to accommodate change in moral understandings and attitudes.

To this end, O'Connor deploys new metaphors from architecture and knitting to describe her approach as "felted stabilism," which locates morality in a large set of overlapping and crisscrossing language games such as engaging in moral inquiry, seeking justifications for our beliefs and actions, formulating reasons for actions, making judgments, disagreeing with other people or dissenting from dominant norms, manifesting moral understandings, and taking and assigning responsibility.

Peg O'Connor is Professor of Philosophy and Director of the Gender, Women, and Sexuality Studies Program at Gustavus Adolphus College. She is the author of Oppression and Responsibility: A Wittgensteinian Approach to Social Practices and Moral Theory (Penn State, 2002) and co-editor (with Naomi Scheman) of Feminist Interpretations of Ludwig Wittgenstein (Penn State, 2002).
Loading...
or support indie stores by buying on