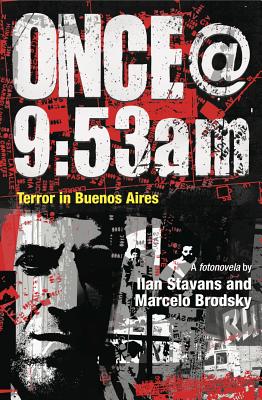 At 9:53 on the morning of July 18, 1994, a suicide bomber drove a Renault Trafic van loaded with explosives into the Asociaci n Mutual Israelita Argentina, a Jewish community center in the bustling commercial neighborhood of Once, Buenos Aires. The explosion left eighty-five people dead and over three hundred wounded. Originally published in Spanish amid widespread controversy, Once@9:53am: Terror in Buenos Aires imagines the two hours before the attack through the popular format of the fotonovela.

Part documentary, part fiction, this vivid retelling of Argentina's deadliest bombing depicts a vibrant, complex urban community in the hours before its identity was forever changed. This expanded English edition includes a new essay by Ilan Stavans detailing the aftermath of the attack and the faulty investigations that have yet to yield any arrests or reach resolution.

A unique and powerful visual experience, Once@9:53am is both a commemoration of an atrocity that shifted Latin American Jewish identity in innumerable ways and an ingenious use of a popular format to explore the dangerous intersection of politics and religion in Latin America.

Ilan Stavans is Lewis-Sebring Professor in Latin American and Latino Culture at Amherst College and the publisher of Restless Books. His books include On Borrowed Words (2001) and Quixote: The Novel and the World (2015). He is the general editor of The Norton Anthology of Latino Literature.Marcelo Brodsky trained at the International Center of Photography, Barcelona. He is a member of the Buena Memoria human rights organization and the Pro-Monument to the Victims of Terrorism Commission.
or
Not Currently Available for Direct Purchase
Copyright © 2020 American Booksellers Association