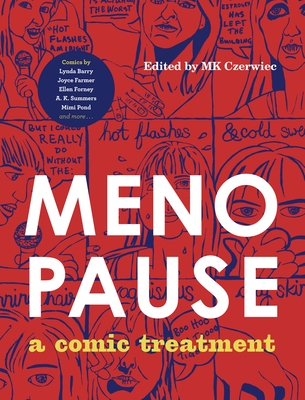 Like so many other issues surrounding women's reproductive health, menopause has been treated as a cultural taboo. On the rare occasions that menopausal and perimenopausal women are depicted in popular culture, they are stereotypically cast as the butt of demeaning jokes that encourage us to laugh at their deteriorating bodies and emotional volatility. The result is that women facing menopause often feel isolated and ashamed. In a spirit of community and support, this collection of comics presents a different view of menopause that enables those experiencing it to be seen and to feel empowered.

Balancing levity with sincerity, these comics unapologetically depict menopause and all its attendant symptoms, from hot flashes and vaginal dryness to forgetfulness, social stigma, anxiety, and shame. Created from a variety of perspectives, they represent a range of life experiences, ages, gender identities, ethnicities, and health conditions. The common thread uniting these stories is the affirmation that, while we can and should laugh at ourselves, no one should be ashamed of menopause. The comics in this book encourage us to share our experiences and to support one another, and ourselves, through self-care and community.

Featuring works by a host of pioneering and up-and-coming comics artists, Menopause is a perfect foil to the simplistic, cheap-joke approach society at large has taken to this much-derided women's health issue. Readers will revel in the sly humor and universal truths found here.

MK Czerwiec, RN, MA, is the artist in residence at Northwestern University's Feinberg School of Medicine and the cocurator of GraphicMedicine.org. She has served as a Senior Fellow of the George Washington School of Nursing Center for Health Policy and Media Engagement and as an Applied Cartooning Fellow of the Center for Cartoon Sudies. She is the creator of the graphic memoir Taking Turns: Stories from HIV/AIDS Care Unit 371 and coauthor of Graphic Medicine Manifesto, both published by Penn State University Press.
Loading...
or support indie stores by buying on