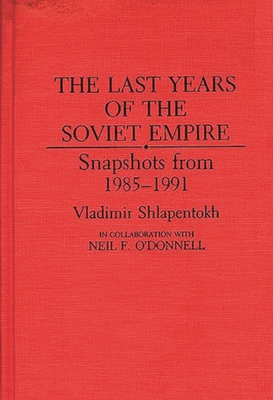 The Last Years of the Soviet Empire (Hardcover)

Between 1985 and 1991, the Soviet Union was shaken to its core by a series of remarkable social and political developments. Throughout the period, the eminent Sovietologist Vladimir Shlapentokh monitored the revolution and recorded his impressions in a series of essays which were published in major North American newspapers and periodicals. Here Shlapentokh collects these snapshots of current events that detail the progression of perestroika and glasnost. The essays and accompanying narrative form a kind of political diary, reflecting not only the facts of history, but the author's perspective as a Soviet/Western observer.

Each chapter focuses on a single year. The snapshots from that year are woven together with narrative describing the year's most important milestones, including events in Moscow, results of new polls, new social trends, and revelations in the Soviet mass media. Surprisingly, Shlapentokh concludes that perestroika was not inevitable, and that the Soviet Union was not, as many scholars assert, doomed to collapse. The author's unusual perspective is preserved throughout the book, since none of the essays, including those that predicted future events, have been altered to more closely approximate events that actually took place. Recommended for scholars of sociology, political science, and Soviet history.

VLADIMIR SHLAPENTOKH is a Professor in the Department of Sociology and Community Health Science at Michigan State University. He is the author of thirteen books published in the former Soviet Union, and many more in the United States, including Love, Marriage and Friendship in the Soviet Union (Praeger, 1984), Soviet Public Opinion (Praeger, 1986), and Soviet Ideologies (Praeger, 1988).
or support indie stores by buying on
Copyright © 2020 American Booksellers Association